Dan 5:09 AM No Comments
Tweet
What do Newcomb, Twain, Mayr, and Crosby have in common? No, they aren't a 60s folk rock band. The answer is that they all tell us something interesting about the cultural power of the eclipse.

What is most interesting about them is the way they reflect various ideas about the capacity for scientific thinking among Americans and others, past and present.

This occurred to me while reading Matt Stanley's very interesting article, "Predicting the Past," from the second number of Isis this year (2012). Stanley traces changing attitudes toward the role of history in astronomy and astronomy in history. His centerpiece is a disagreement between Greenwich's Astronomer Royal, George Airy, and the head of the American Nautical Almanac, Simon Newcomb. Airy turned to ancient Greek sources for data on past eclipses that could help him calculate the "secular acceleration"of the moon, a small but crucial constant necessary for making precise lunar tables. Newcomb, on the other hand, distrusted ancient, unscientific sources and instead ventured to Paris and St. Petersburg, looking for 17th and 18th century data that could provide an alternate route to the same end. Along with fascinating questions about the history of observation, the paper led me to think about about astronomers' extraordinary concern with error and the quantification of error. Stanley, for his part,  points ultimately to Huxley and Darwin and to a rising faith that science that predict both the past and the future. I won't rehearse Stanley's entire argument here, but I encourage our readers to check it out.

Newcomb emerges as a particularly intriguing figure. A long-time computer under Charles Henry Davis and Benjamin Peirce at the Nautical Almanac in Cambridge, Newcomb took over the program and ran it throughout the late nineteenth century. Stanley presents Newcomb in 1871 as so determined to acquire data from the Paris observatory that he "had to maneuver past the Commune barricades to spend this days in the observatory. As he sorted through their extensive records, he reported being distracted by the flashes and booms of nearby artillery fire." (267) Newcomb undoubtedly enjoyed telling the story---seldom do archival visits provide so ready a tale of scientific heroism. But it also makes me wonder how a close experience with the Commune shaped what David Alan Grier has called Newcomb's "conservative nature" and his lack of "sympathy for the complaints of workers, labor movements, and strikers."(When Computers Were Human, 114)

Newcomb had ambitions to make America more scientific. He imagined applying the predictive powers of astronomy to political economy, in striking terms:

“Were our knowledge of the whole world, including, including every man in it, complete in every particular, and were we able to apply this knowledge at every moment, we might imagine ourselves to predict all economic phenomena by this method much as the astronomer predicts the motions of the planets.” (272)

Apart from this renewal of Laplace's demonic(!) dreams, he envisioned organizing American society around scientific thinking. As Stanley puts it, "he thought science was a necessary part of citizenship and social progress. If the American people could be trained in science, the country could be improved immeasurably."(273)

One of the inheritors of Newcomb's faith was a passionate reader "in popular science, particularly astronomy," Mark Twain. (275) In a famous passage from A Connecticut Yankee in King Arthur's Court, Twain uses an eclipse to advance his plot. The Yankee headlining the book, who magically travels back in time from the nineteenth to the sixth century, happens to have past eclipse dates memorized. This allows him to conjure up a test to confirm what the "lunatics" were telling him, that the year he found himself in was in fact 538. It also provides him with a tool to free himself from a death sentence: he says he will blot out the sun, and then he does. Quaking with fear from his powers, King Arthur grants him the title Sir Boss, and the story goes from there.

Twain, like Newcomb, understood there to be a fundamental difference between scientific thinking and pre-scientific thinking. That's what makes Ernst Mayr's later story so wonderful. Here it is, from the Museum of Comparative Zoology's "informal chronology":


1928 [Mayr] Leads ornithological expeditions to Dutch New Guinea and German Mandated New Guinea. An experience that fulfilled “the greatest ambition of [his] youth.” Collected ca. 7000 bird skins in two and a half years. Dr. Mayr recently recounted an anecdote concerning these expeditions that illustrates the playful side of the scientist: He tried to increase his standing with the New Guinea natives by using a trick employed in Mark Twain’s A Connecticut Yankee in King Arthur’s Court. Upon learning from his almanac that a lunar eclipse was about to occur, Mayr announced to the tribe, through an interpreter, that the moon was about to totally darken. Unlike Twain’s characters, however, they were not impressed, and the elderly chief said to Dr. Mayr, “Don’t worry, my son, it will soon get light again.”

Mayr inadvertently tested Twain's ideas about scientific thinking (and maybe Newcomb's too, although we probably shouldn't blame Newcomb for Twain). Those ideas failed spectacularly and hilariously. 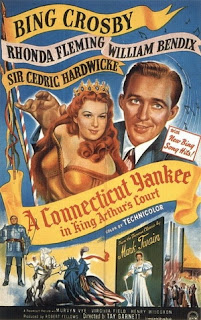 Mayr relied on an almanac instead of memory, which strikes me as more sensible and plausible. Hollywood must have thought so too. In the movie version of A Connecticut Yankee, Bing Crosby also consults his pocket almanac to discover the timing of the eclipse. Newcomb, an almanac maker, would have approved. Still, I think there's an important distinction here. Newcomb made a specialized nautical almanac, a self-consciously scientific document---indeed, a kind of proto-Big Science. Crosby's Sir Boss draws on an older tradition of texts (if my memory serves right), the farmer's almanac: one part modern science and one part early modern miscellany, an amalgam of new thinking and folk wisdom.