As I'm sure most of you have heard, the US Supreme Court issued its ruling on the Myriad Genetics case today. There were no real surprises to speak of in the decision, as the court ruled exactly along the lines the executive branch asked it to. In an amicus curiae brief, lawyers for the US Department of Justice argued that whereas DNA sequences ought to not be eligible for patent protection, modified or so-called "complimentary" DNA does not qualify as a product of nature and is therefore patentable. The Supreme Court's ruling, authored by Justice Thomas, towed exactly this line.

We've covered this case previously on this blog (here, here and here) so I won't go into all of the details now.  But there are a couple of things worth pointing out.

Myriad's argument that gene sequences are patent eligible because the act of isolating DNA turns a product of nature into an invention is a stretch, to say the least. Still, there was widespread concern that invalidating Myriad's patents would strike a serious blow to the biotechnology industry, with major repercussions for America's post-industrial economy. This helps to explain why the court went out of its way to emphasize the distinction between gDNA and cDNA (the latter is basically regular DNA with all the introns cut out).  As Eric Lander, the head of MIT and Harvard's Broad Institute argued in his own friend of the court brief, the decision to uphold patents on cDNA helps to ensure the future profitability of biotech.

Second, my earlier prediction--the court's ruling would hinge on the ontological question of whether genes are physical objects or informational entities--turned out to be right. Writing for the court, Clarence Thomas insists that Myriad's patent claims "focus on the genetic information encoded in the BRCA1 and BRCA2 genes," not their "chemical composition." Hence, the fact that isolating these genes for sequencing required breaking covalent bonds in the DNA molecule is of no legal significance.

In the end, though, there were no real surprises in the court's legal reasoning. Still, there was at least one major surprise (to me anyway).  It was the fact that the court issued a unanimous ruling today! I had predicted the court would strike down the patentability of gDNA but uphold the patentability of cDNA, but I had no idea which judges would vote which way. And I never would have guessed they would all agree on this issue. (Especially given the many differences of opinion on the circuit and appeals courts.)

Finally, and somewhat ironically, perhaps the most interesting part of the court's decision turned out to be Justice Scalia's concurring opinion, which I'll reproduce here in full. 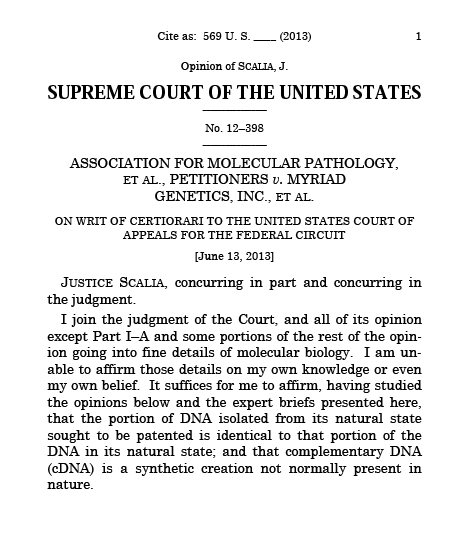 Is Scalia just being his usual snarky self, insisting that he have the last word? Or is he making a much more substantive argument about how Supreme Court justices ought to approach legal questions whose resolution requires taking a stand on technical issues that hinge on extra-legal expertise? Or, is Scalia actually saying that he's unwilling to legislate ontology from the bench?