Science in the Streets 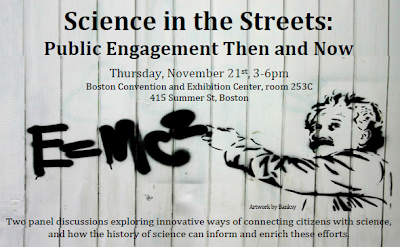 [I have asked Conevery Bolton Valencius, who teaches at UMass Boston, to write a guest post about an event she is helping to organize at this year's HSS.  Many readers of this blog are interested in popular science & science popularization, and I urge everyone to join us for what promises to be a fascinating discussion!]

Current newspaper headlines make clear how anti-science and science-illiterate many Americans are, at least about some political issues.  But there are effective and interesting efforts going on all around to engage people in the workings and the wonderings of science.  Further, historians of science are doing a lot of that work – and sometimes have particular insight about what is new or very old about rhythms of scientific skepticism or scientific enthusiasm.

At next week’s annual conference of the History of Science Society, we’ll explore some of the most exciting current efforts to engage the public in scientific research and scientific education – and we’ll reflect on how historians of science are contributing to those efforts.

The HSS conference opens with Science in the Streets, a free, all-ages public event at Boston Convention & Exhibition Center (on the Silver Line!), Room 253C on Thursday, November 21, 2013 from 3-6pm.

To find out more, continue reading after the jump.


“Science in the Streets” will feature Brian Malow (the science comedian) and Ari Daniel Shapiro of the popular science storytelling project The Story Collider, as well as historians of science, museum directors, and researchers. From fossils to FoldIt, the event will highlight the role of the public in science throughout history.

“Science in the Streets” has two halves: “Science and Spectacle” and “Crowdsourcing: Science by the People?”  In each, we will hear from do-ers in these fields, demonstrating some of the ways in which they are currently engaging a variety of communities in contemporary scientific practice.  Then a panel of historians of science will offer commentary about how these activities connect with or differ from historical examples in the past, and we will open the floor for discussion and debate.

“Science in the Streets” is a joint project between the History of Science Society and the Boston University Center for the Philosophy and part of the new HSS “History of Science Matters” initiative, designed to highlight the relevance of the history of science beyond its usual academic boundaries.

Don’t just sigh in annoyance when you read the headlines - Join us and see some of what’s going right!

--Conevery
Conevery Bolton Valencius just published The Lost History of the New Madrid Earthquakes and teaches the history of science and of American environments (and the U.S. Civil War) at UMass Boston.  She sometimes sighs at the headlines.

Your website is terribly informative and your articles are wonderful.
buy peptides