Home » Hank » Darwin vs. Lincoln: The Case of Pragmatism

Darwin vs. Lincoln: The Case of Pragmatism

Hank 4:08 PM 3 comments
Tweet
This past weekend saw an interesting anniversary: the double birthday of Charles Darwin and Abraham Lincoln, who were born across the Atlantic from one another on 12 February 1809. When I thought about how to mark it here on the blog, my mind turned where it so often does: to pragmatism.

Why? These two figures (in the form of their involvement with evolutionary theory and the Civil War) buttress what is now perhaps the most famous account of pragmatism and its origins: Louis Menand's The Metaphysical Club, which won the Pulitzer Prize for History in 2002. 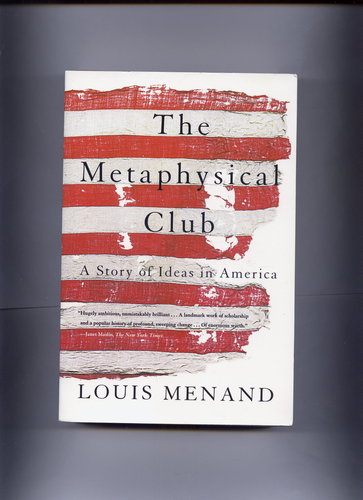 It's a captivating quadruple-biography and a compelling synthesis of lively philosophical ideas, in which Menand frames the development of "classical pragmatism" in the Cambridge of the 1870s as stemming from the joint impact of Darwin's theory of natural selection and various figures' relationship to the Civil War.


Certain reviewers questioned the strength of this Civil War connection, since only Menand's first protagonist (Holmes) served in it and his last (John Dewey) wasn't even six years old when it ended. That is, while the war was of course important, the lines drawn between it and philosophical ideas that emerged a decade later were not strong enough.

As a result (perhaps), Menand's subsequent treatments have tended to nudge the causal arrow further in the direction of Darwin and his evolutionary ideas. For example (and as an excellent hour-long summary of the book, for those who don't have time to read the whole thing), here's a lecture he gave on the book a couple years after it was published:

In it, Menand seemingly reappraises the balance between the impact of the Civil War and Darwin's theory in response to the very last question during the Q&A (beginning at 59:20), which was about the philosophical affinities between the "classical pragmatists" and their Common Sense forebears.

Menand acknowledges these connections, but then goes on to insist:


I don't think that one should underestimate the influence that the theory of natural selection had on pragmatism as a philosophy. I really do think that that basically gave them the impetus to develop pragmatism, and the reason was (and Dewey is fairly explicit about this) [that] they felt philosophy had fallen behind science, because science was changing the world and Darwin had described a world that didn't fit traditional philosophy.

Whether this is a genuine shift in Menand's understanding of the origins of American pragmatism (as the phrase "basically gave them the impetus" suggests), or whether its a subtler shift to the Civil War providing the cultural context and Darwin providing the intellectual impetus (to introduce a spurious internal/external divide at the last minute!) remains unclear.

What is clear, taking the book and the lecture as a package – and acknowledging Menand's key role in the reemergence of pragmatism (and James) in the public imagination in the last decade – is the significance of last weekend's dual birthday in the context of renewed interest in a key set of ideas at the boundary between American intellectual history and the history of science.

Hank: thanks for this post. That Menand talk does feel like a turn-about from the book and in a good direction.

I am just beginning teaching the third section of my US intellectual/cultural history course (the whole shebang, crammed into one semester). The section is called "Becoming Victorian Americans" and leads off with Spencer and Darwin readings. Then we do the Civil War. And we're reading bits of Menand. The section's big question is: which matters more to US cultural history, Darwin or the Civil War? Sure, it's not exactly a question that has an answer, but I think its provocative.

Also, with Spencer in mind, I recommend to our readers this fun Shapin essay from the New Yorker a number of years ago.

I am teaching _The Metaphysical Club_ now. As I am rereading it, I am becoming more convinced that the Civil War is not really a cause even of Holmes' big intellectual shifts. The Civil War doesn't make Holmes into a specialist in the law who rejects Emersonian generalism---that happens to Holmes for the same reasons that his entire generation in the US and Europe become specialists: industrialization and the increased division of labor being the key factors, I suppose.

Instead, I think Menand picks up on the way in which the Civil War provides Holmes (and his American generation---including William James, who did not fight) with a kind of discourse through which they could talk about those changes taking place in their lives. Just as American revolutionaries and Tories both drew on the imaginary of classical Rome in the 1770s as they fought over the colonies' proper relationship to Britain, Holmes and James and their peers drew on a much closer set of stories (those of sacrifice, horror, and war) to fight over the proper organization of knowledge within an industrializing society. The Civil War was not the cause. It was the stuff with which they thought---that's the part that is peculiar to the Americans. The Europeans had to find other stuff to use to talk through the same conditions.