Dragons in the Museum

Dan 10:04 AM No Comments
Tweet
In Berlin, they keep dragons in the museum. Right next to the lions. And the aurochs.

(The dragons are the strange-looking cat creatures....)

I recently* viewed the displays at the Pergamon Museum (named for the enormous alter in its first room, more on that later), and found them, once again, entrancing. Only the British Museum's artifacts compare with the Pergamon treasures.

I arrived at the museum with some new mental baggage and ended up enjoying my visit all the more. Keep reading for more Babylonian aurochs, a king's bodyguards, a few gods, and a tip to try on your next museum excursion.

Here's a closer look at one of those aurochs. 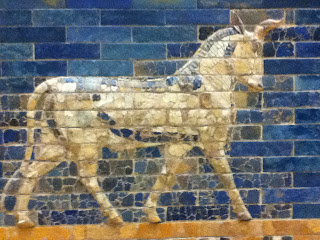 Beautiful, right? And well preserved for something from the sixth century B.C.

But, as it happens, this auroch doesn't only hail from sixth century B.C. Babyon. It's also a mid-twentieth century creature---one built from old remains, but updated with contemporary (German) skill and creativity.

Here, without such updating, and preserved behind glass, is a more fully sixth century auroch. 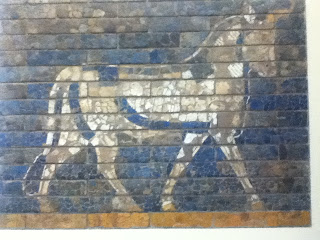 Not so sharp, nor so saturated with color, and flaky in a literal sense, but still the same animal.

Undoubtedly some will see these two and think: what a shame that the original wall has been perverted by modern hands (by its reconstruction, first, and then by subsequent touchings up). And they will have a point. There is, as a historian of archaeology who I know argues, a very real beauty in the unbuilt wall---in the boxes of wall bits not reconstructed, but carefully organized and labeled in an effort to faithfully document the past. Those bits have a stronger claim on us as mechanically objective, as being less skewed or altered by interpretation and handling.

But I must admit that I found the 'perversions' to be one of the most exciting parts of those aurochs and their neighbors. Here I stood, gazing from the twenty-first century at a hybrid of the twentieth century C.E. and the sixth century B.C. What a glorious confusion of times!

I don't have many tricks when it comes to museum visits, but the few I have I stick to. First, I never listen to pre-recorded guides and seldom follow human guides---there's no good reason for this. I'm just stubborn: I'll find my own way though the museum, thank you. Yet I prefer to go museums with at least one friend. I first came to love art museums when an old college roommate taught me his trick: in every room, you have to choose a painting (sculture, artifact, what have you) that stirs your passions, and then you have to share your choice. Choosing to love (or hate) a precious museum piece proved empowering. Once I had the capacity to dislike "art," I became capable of loving it. I have since passed this trick along to many others.

Looking at those aurochs, I realized I had stumbled onto a new trick: look for curators' and scientists' hands in the museum, and enjoy their work alongside the work of those responsible for the original artifacts. We've been talking about museums on the blog in the last few months (here and here), and I owe my new trick to Lukas, but not because of his blog entries.

Last September's issue of Isis featured Lukas' "Bringing Dinosaurs Back to Life." In that article, Lukas argues that dinosaurs at the American Museum of Natural History ought to be understood as mixed-media displays, meant to awe and attract crowds with their sculptural "iconicity" while also exhibiting the bones (objective artifacts) themselves. It's a lovely essay, complete with a fascinating section on the way that AMNH curators used the bones to test out theories of dinosaur structure and consider the question of dinosaur's distant progeny (birds or reptiles). But what I loved most was the way that thinking about the objects as mixed media turned the focus back on the curators, and on the work of science (and art and invention) that necessarily goes along with museum work.

So when I see these guys (some of my all time favorites), 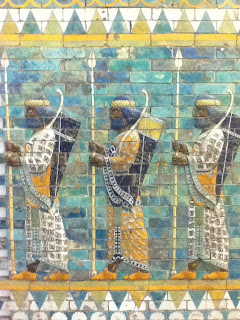 I can appreciate them all the more, as hybrids, derived from this guy, but enhanced modern hands (the German wikipedia page has more detail on exactly what those modern hands did): 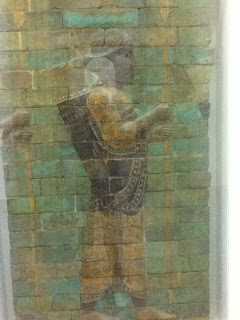 The Pergamon museum also featured another impressive reproduction, this one by Yadegar Asisi, the latest of many attempts to complete the "Great Frieze" of the Pergamon Altar.

Thus Asisi began with these gods at war: 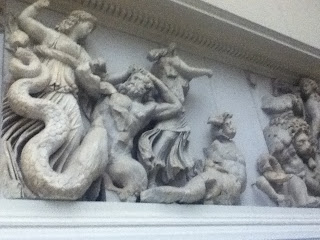 And created a full-fledged battle scene: 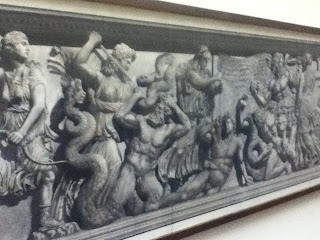 In such efforts, the artist/scholar/scientist stands out. We even know his name. What I find particularly delightful, however, is the realization that many skilled, clever, thinking hands fill museums with many, many other hybrids too, just waiting for us to discover them anew.


*Well, it was a couple months ago now, but that's recent in historical terms.