Jenna 10:00 AM 2 comments
Tweet
Back in July, something pretty serious happened. On July 8, 2014, the CDC made a chilling announcement: six vials containing the smallpox virus were discovered in the back of a freezer in a NIH laboratory in Bethesda, MD. The vials were discovered when a researcher cleaning out the lab pulled them out of a cardboard box. Nobody had any idea that they were there.

The CDC reacted to this serious discovery in an appropriately serious manner. After the authorities were alerted to the existence of the variola-labelled vials, the CDC immediately took possession of the samples and brought them to a high-security laboratory in Atlanta. After testing the contents of the vials, the CDC invited the World Health Organization (WHO) to witness their destruction. A few weeks later, the CDC confirmed that the vials did indeed contain smallpox, and that the material in at least two of the samples was capable of infecting humans. Disaster was averted, but only narrowly.

And yet, something funny happened when the CDC announced this wildly terrifying discovery. The internet, and in particular the twitterverse, found the whole situation to be rather…hilarious.

July 8 will be remembered on the internet as the day of the smallpox joke. Now, smallpox-related comedy is an odd genre (to say the least), and it will be the topic of my blog post today. Although I won’t always be joking about deadly diseases here at AmericanScience (which should come as a relief to the rest of the team), I will be writing about the cultural and social dimensions of biology and medicine.

Before this summer, my exposure to smallpox humor was limited to the wildly inappropriate “smallpox blanket” card one can play in the irreverent game Cards Against Humanity (If you don’t know what I’m referring to, you can check it out here).  In my experience, the card is usually played to great effect, eliciting a combination of horrified laughter and disapproving gasps. And far as the game goes, this is generally the point.

As English actor Peter Ustinov once observed, “Comedy is simply a funny way of being serious.” Humor is a universal human mechanism for confronting the issues that make us the most uncomfortable. As a historian, I’ve always found jokes to be useful sources for understanding a given culture. In the instance of Cards Against Humanity, the smallpox blanket card invokes the long and violent and history of the European colonization of Native Americans - and that makes most people pretty uncomfortable. And so the academic (read: humorless) side of me can’t help but wonder: What are the anxieties driving this particular wave of smallpox humor? Why is smallpox humor even a thing?

Based on my observations, here are a few ways you can laugh at smallpox:

1. A Disease of History

I admit that my own reaction to the SmallpoxVialsFiasco2014 was generally sarcastic. Sometime between hearing the news (while in very close proximity to Bethesda, I might add) and picking my jaw up off the floor, I turned to social media to express my incredulity: 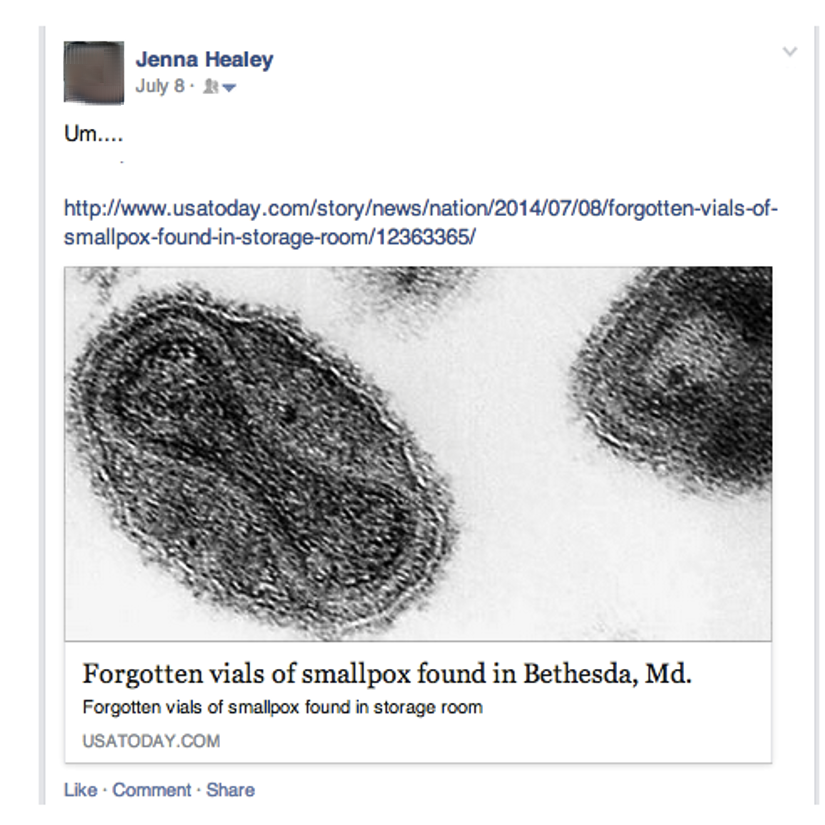 My sarcastic reaction was not uncommon. Twitter filled up with comments that were some variation on “Oh, no big deal, I JUST FOUND SMALLPOX IN A FREEZER”:

These flippant comments were a reaction to the dissonance created when you juxtapose an act as mundane as cleaning out one’s freezer and with the horror of discovering samples of a deadly human virus that is not supposed to exist (according to the incongruity theory of comedy). No way around it: the scenario in which one opens up a cardboard box and finds smallpox in it seems inherently ridiculous.

But this is only because we live in a post-1980 smallpox eradication world. I can’t imagine anyone having the same reaction to a story in which a scientist stumbles upon a box of diphtheria samples, for example. And there is evidence to support this - in the month of July, the CDC had two other serious incidents in which samples of anthrax and H1N5 avian flu were left unsecured. It was also confirmed that the box that contained the vials of smallpox also contained 300 other vials holding dangerous infectious agents. None of these incidents inspired the same incredulity, or fear, that the smallpox discovery did.

Smallpox wields special power not only because it is so deadly, but because it feels so out of place in our modern world. Smallpox is a disease of history. Its story has been relegated to textbooks and fading vaccination scars (and the John Adams miniseries on HBO). It may have dramatically shaped our past, but it has no place in our future. To be so sure that humans have banished smallpox from the face of the earth, only to find it carelessly stuffed into the back of the freezer, is humbling and horrifying at the same time.

Some jokes were aimed at the supreme incompetence of the NIH/FDA/CDC/IRS/the White House/Obama, take your pick. To be fair, the discovery of decades old samples of smallpox in an unsecured federal laboratory does not exactly inspire confidence. It was a perfect opportunity to get in a dig at inefficient bureaucracies: 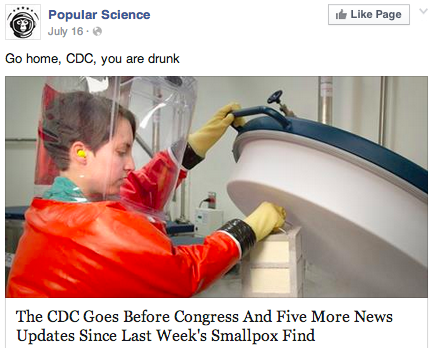 I highly recommend this piece in The New Yorker that imagines a memo sent to NIH maintenance staff after the incident. After reassuring staff that there (probably) aren’t any other deadly pathogens “lying around the facility, tucked behind hedges on the grounds or stacked like cordwood in the common areas,” the supervisor suggests a few precautions that should be taken (Just in case! Probably unnecessary!) What follows is an inane list of bureaucratic instructions, ranging from using a wet floor sign to signal the discovery of deadly neurotoxin to leaving the Ark of Covenant untouched if one happens to come across it.

Beyond poking fun at bureaucracy, the piece is also reacting to complaints made by NIH workers that they were not notified when the vials were found. Fortunately, no workers were harmed during the incident. But one can imagine workers being evacuated for much less than the discovery of a Tier 1 infectious agent.

Lastly, this comic appeared in the Chicago Tribune on August 5, after the CDC announced that two physicians infected with ebola would be transported back to the United States for treatment. Fear of this new deadly scourge collided with outrage over the smallpox incident and claims of incompetence on the part of the CDC. If the CDC can't keep track of diseases we've eradicated, how can we trust them with new biological threats?

A gem to emerge from this wave of smallpox humor was the parody twitter account, @NIH_Smallpox, created in honor of the vials themselves. Turns out that tweeting from the POV of long-lost vials of smallpox is a goldmine of comedic material:

Only 24 hours after its creation, however, the NIH_Smallpox account was temporarily suspended for making disparaging comments about celebrity anti-vaccination crusader Jenny McCarthy. But the vials (and others) managed to get in a few good shots at the anti-vaccination camp first:

I found this one to be a tad peculiar, because a) we no longer vaccinate against smallpox b) strategic vaccination against smallpox (in the military, for example) is highly controversial. Smallpox is one of the few cases in which the risk of accidental infection through vaccination potentially outstrips the risk of contracting the disease in another situation. More than anything, these jokes show the intensity with which the vaccine debate is still raging in the United States.

4. Saving The Best For Last

What is my very favorite smallpox joke, you might ask? Without a doubt:

I do love a good pun.

If you’re interested in more smallpox jokes (because, who isn’t?), check out this great compilation (which I can't take any credit for) by @tarahaelle .

This is fantastic, Jenna, thanks.

I wonder whether the burst of jokes underscores how infectious disease is our current most-likely candidate for TEOTWAWKI (an acronym I discovered in writing my post on Tuesday, when I found that survivalists are using "walkability" as an index for locations to avoid). I wonder whether, say, the discovery of a couple neglected nuclear warheads would inspire the same sort of reaction. Maybe so. Still, the epidemic and the zombie apocalypse movie have taken the place formerly occupied by _War Games_ and _Dr. Strangelove_; presumably our gallows humor is heading in a similar direction.

fascinating stuff, jenna! i would love to know your take on the other unexpected medicine and humor-related phenomenon of this summer of the ALS ice bucket challenge...