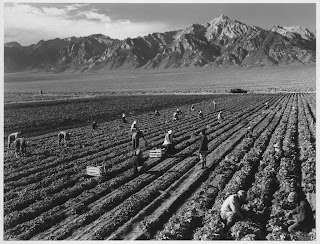 In November, University of Florida Professor, Vassiliki Betty Smocovitis gave the Distinguished Lecture for the Forum for History of Science in America at the History of Science Society annual meeting in Montreal. In her talk, she documented the career of cytogeneticist Masuo Kodani, who was interned at Manzanar during World War II. For those of us who attended, the drama of Smocovitis' narrative was underscored by her use of iconic images from the time-period. Stark black and white photographs made by Ansel Adams and Dorothea Lange belied the spectrum of racial tensions in America during and after the war. 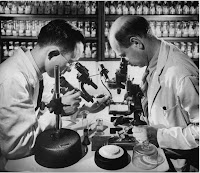 outside the networks that had developed to support European emigres like Stern. Thus, Kodani was re-located to the Manzanar camp. While interned, he and other Japanese-American agricultural and scientific specialists were tasked with cultivating an alternate source of rubber -- vital to American wartime needs.

In linking history of science, war, and race, Smocovitis presented a startling account of the decidedly intimate way global tensions were experienced by geneticists working in America. Even after the war, enduring racial anxieties contributed to the disintegration of Kodani's family when his wife Fumi was declared to be residing illegally in the U.S.

The lecture has now been published as 'Genetics Behind Barbed Wire: Masuo Kodani, Emigre Geneticists, and Wartime Genetics Research at Manzanar Relocation Center' as part of the Perspectives series in the Feb 2011 issue of Genetics.

Joanna: Was the lecture mostly biographical, to your mind, or do you think its themes and conclusions spin out to something bigger than that? Nothing with biography, of course, and Kodani's life does seem to well capture the dark place where war, race, and science intersected in the period, but is there something we can take from it for our knowledge of those patterns in general?

Great question! While the lecture centered on Kodani -- a deeply important account in its own right -- I came away with a new appreciation for the way affective networks structure scientific careers. Emotional relationships in one's personal and professional lives (which sometimes overlap, with consequence) matter for issues like citizenship. So there's that . . .

But the lecture also got me thinking about spaces of science in wartime contexts. We know a lot about the contributions European emigres made to American science during and after WWII. But this story brings into view new sites of knowledge production & knowledge producers (e.g., labor camps and interned Japanese-American agricultural experts)

Last point -- really a question to others -- what do you think about the role of biography in the history of science? What are its strengths? What are the potential pitfalls.

It hadn't struck me---until you said it again here---how incongruous a juxtaposition you get by putting the wartime emigre's lab next to the interned Japanese researcher's work in a labor camp. It certainly leaves me with a much meatier picture of WWII science---a welcome addition to the dominant picture I carry with me, which is mostly a series of jokey Feynman montages interspersed with computers, bombs, and chemical plants. Oh, and radar.