Hank 1:25 PM 1 comment
Tweet
A few weeks ago, three of the four of us (Hank, Joanna, Lukas) spent a week together on Ischia, an island off of Naples.
We were there for the The Twelfth Ischia Summer School on the History of the Life Sciences, sponsored by the Wellcome, the MPIWG, and the Stazione Zoologica. 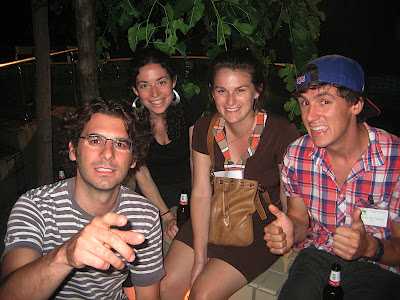 Lukas, Helen, Joanna, and Hank (poolside)
Here's a description of the event. This year's theme was "Biology and the Public: Participation and Exclusion from the Renaissance to the Present Day," which was relevant to each of our projects in different ways.


We had a great time–inside and outside the seminar room–and decided to do a three-part report for the blog. Each of us will pick an interesting theme from the week's conversation and run with it (briefly).


One thing I kept jotting down in my notes was that we spent way more time interrogating the category of "the public," and a lot less time hitting an older hobby-horse: "biology." Focus is necessary in a conversation ranging across centuries and continents, but the disparity in our analysis was striking for a few reasons.


Even in seminars on topics far-removed from "biology" (sixteenth-century exploration, for example), we tended to focus more on who the public was and how they were involved, rather than on what they were involved in. Victorian botany isn't modern biomedicine, but we talked about their "publics" in similar terms.


This isn't a bad thing, but it suggested some unspoken assumptions. There's something that justifies hitching Réaumur to radiation oncology but not to the real numbers. Whatever that "something" is, it was in the background of discussions about the themes that cancer patients and collecting practices have in common.


Talking about "the public" more than "biology" wasn't a reification of the latter as something stable that engaged, more or less, with a more nebulous public. Or at least, it wasn't for everyone. This came up when Potter Stewart was invoked as part of a working definition of science in general: "I know it when I see it."


We all use this sort of shorthand in our work: generalizations and metaphors provide a framework for whatever it is we're analyzing. That said, over the week in Ischia, the technical content of ideas tended to move to the background as social and material questions came to the fore. "Content" and "context" switched places.


What has this got to do with AmericanScience? One thing it might suggest is a parallel shift in context and content: instead of asking what makes some science "American," we might ask, paraphrasing Andy Jewett: What makes America scientific? How has America been re-imagined in light of scientific thought?

I like your idea of switching content and context in the history of American science! (Not least because, like you, I'd like to see more American historians read up on the history of science.) So let me just make one quick point: