Science and The New Inquiry

A few weeks ago, a piece in the NYT Style Section called "New York's Literary Cubs" was making the rounds. It profiled The New Inquiry ("a scrappy online journal and roving clubhouse that functions as an Intellectuals Anonymous of sorts"), whose founders were after "a kind of literary salon reminiscent of the Lost Generation of the 1920s." 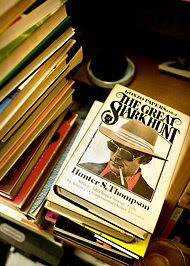 I'll leave their (fun) "Two Audience" theory of the Style Section (hint: the writing is purposefully annoying) to them. Instead, I want to explore the gap between "literary salons" ("Moveable Feast-type stuff") and the earlier philosophical clubs I'd been reading about for a chapter on pragmatism and psychology.
Why do pretentious, well-educated young people ("Fueled by B.Y.O.B. bourbon, impressive degrees and the angst that comes with being young and unmoored") take up literature and literary theory ("Edmund Wilson and poststructuralism") so much more than philosophy or – and here's the real question – science?
A plausible answer lies somewhere between C.P. Snow's "The Two Cultures" and Mark Greif's "What Was the Hipster?" Snow's "literary intellectuals" became just "intellectuals"; at some point, the "literary" was redundant. It's hard to imagine the cubs reading classics from the history of science, much less recent research. Why?
Why, that is, would readings be limited to the literary, when Menand's "The Metaphysical Club" reveals a range from German poetry to British logic to Darwinian biology? One senses this latter landscape wasn't consciously rejected by today's literary cubs; it seems to have been beyond the pale. Again, why only literature?
We might credit Snow. Whether or not he was right (here's an overview), his essay did help catalyze the antipathy it purportedly described. John Brockman's "Third Culture" (which I discussed here) asks us to buy "scientific intellectuals" as a maverick sub-culture; with no science on the New Inquiry reading list, we just might. This brings us, briefly, to the hipster. Greif hinges his analysis on hipsters' emphasis on "forms of knowledge that they possessed before anyone else," on "a priori knowledge as a means of social dominance." There's something about this element of performance that feels somehow distant from the philosophical clubs of the 1800s.
The New Inquiry meetings center on "a group reading in which each person selects a three-minute reading on the predetermined topic." The impression one gets from the story is of a disconnected series – a conversational commonplace – in which erudition is performed more through selection than exposition.
What is it, then? It's show and tell. Two attendees are embarrassed to have chosen the same author; there's a "predetermined topic," but there isn't an argument in sight. Don't get me wrong: the famous clashes of The Metaphysical Club don't explain their openness to scientific thought – the differences are more complex than that.
But there's something that puts Kanye and Camus in bounds and leaves Kant and combinatorics out. Is it fashion–or fear? As another article on cultural malaise put it, "people are comforted by a world that at least still looks the way it did in the past." Will intellectuals always pine for 1920s Paris? Will science ever be hip?

Some quick impressions, stemming from your observation about New Inquiry meetings being more about"selection than exposition."

It strikes me that another way to think about this would be in terms of curation. At my most optimistic, I might say that, in time, New Inquiry members *could* be curating a cultural landscape that *could* lead to rapproachement. This, admittedly, may not be the goal (see me at my most cynical below), but I wonder, is there a way to frame your critique that situates selection qua curation as an act of intervention for reuniting the "Two Cultures"?

At my most cynical, I tend to agree that, at least via the NYT, NI members are engaging in a form of self-fashioning in which the ability to discern *saleable* cultural products (or to craft oneself as an arbiter) is the most significant "finding." And if 1920s Paris is what sells, then . . .

One major difference, it would seem, between NI and MC is the different role of the self, science and both of their relations to capital over the "long" 20th century . . .

Totally agree about that last point – seems like something about which someone could write a dissertation..