Should Online Communities Have Rights?

Lee 1:48 AM 8 comments
Tweet
On November 30th, 2012, NCsoft, a South Korea-based video game maker, shutdown one of its digital properties, a massive multiplayer online roleplaying game (MMORPG), City of Heroes. Its community of gamers, many of whom had played the game for several years, had earlier reacted with startled indignation when the closure was announced. Indeed, some held in-game protests in front of City Hall in the game's fictional capital; they called it Occupy Paragon City. (You can see video of one of the protests, along with live commentary, here.)


I never played City of Heroes, nor have I had much interaction with the MMORPG scene, but in this post, I want to consider some of the interesting developments around technology and community in the City of Heroes story. And I want to ask the question: should online communities have rights?


City of Heroes was released in 2004. While most MMORPGs, like Everquest and World of Warcraft, focused on a Tolkienesque fantasy setting, City of Heroes enabled users to become superheroes (and later supervillains). The game had its ups and downs, and present and former players believed that game designers had made missteps in developing the world. Still, many were shocked when they heard the news at the end of August that the game was doing to die.

The players reacted in a variety of ways, beyond the protests already mentioned. Many shared stories. One former player, now writer, claimed that the game "saved [her] life," and there are plenty of anecdotal tales about couples who met on the game and later got married, about babies who would not exist if it not for City of Heroes, etc., etc. We've continued to see new forms of intellectual exploration around online communities as well, including this video on the pending killing of City of Heroes by the blogger, MMOAnthropology. (He has some cool ideas, though I wish they were more deeply informed by academic anthropology; of course, others are already up to that intellectual "game"). Organizers also created an online petition to keep the game active. 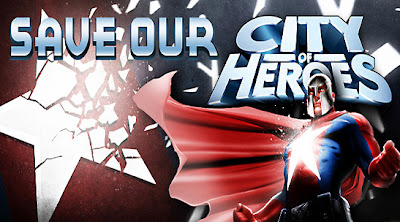 For sometime, I've been following these kinds of both in- and out-of-game activities from a distance (mostly with the help of an old friend and active gamer, Richard Piskur). For instance, Rich showed me how players within the Facebook-linked strategy game, Battle Pirates, hold in-game vigils for other players who are undergoing some hardship. There are even reported cases of hoaxes, wherein people feign sickness or death in order to have a vigil held in their honor.


With these new forms of communality arising, we can—and maybe should—wonder whether these online communities deserve some kind of protection, or at least the development of norms that would keep these kinds of closures from happening. In an interview with The Korea Times, the fantasy author and City of Heroes player, Mercedes Lackey called the closure "unethical." As she argued, “I think canceling a game that is making a profit, along with destroying jobs and an online community, is entirely unethical. And I believe that companies that do that are going to get exactly what they deserve, as customers revolt over greed killing cool.” It's easy to mock online gamers. They are on the ass-end of a lot of jokes. But when it comes to thinking about rights, what marginalized community has not been ridiculed?

One pissed-off player and blogger wrote about the "costs" of closing the game, including a) "loss of revenue" (many people claim that the game was profitable), b) a "loss of faith" in NCsoft (lots of calls for boycotts), c) loss of development talent (NCsoft folded the game's development team), and, most important for my purposes, "loss of culture." He wrote, "CoH's closure is helping to eliminate the idea that an MMO is a home, someplace you stay through thick and thin."

Some of the venom is unsurprisingly being spat at real cultural divides, namely the oceanic one between the Korean firm NCsoft and its US users. Players have drawn attention to the poor morale among NCsoft's employees to suggest that the company is a bad actor. For instance, at this page, (supposed) former employees have left harsh (and racist/nationalist) criticisms of the firm's policies, like this: "Advice to Senior Management – After your meltdown please do not attempt to re-open to the United States. Stay in Korea. Thanks."

It seems to me this cultural divide is beside the point, however; the issue of online communities and game closures is really about the role of capitalism in shaping the online world. Corporations are building online spaces that people want to inhabit. They fill those spaces with desirable things: nifty graphics, involved plots, fun. And in those spaces, people form communities; they make friends; they create inside jokes and a local culture. (One character in City of Heroes was a rather large rabbit named Watership Doom.)  But companies can kill the games whenever they want.

So what rights do players have to keep their communities and "their" games? We see some people beginning to ask questions about this. For instance, at pc.gamespy.com, some called OOPManZA commented:

"I think that all MMOs, including CoH, should operate under a policy whereby when the parent company decides to shut down the game the following happens:
1. Game server and client code is open sourced and placed on GitHub
2. Game assets are made available under a suitable license that allows for them to be used freely but not resold by any third-party.
I think this would be awesome as it would prevent the game from disappearing completely and also allow the community to become the maintainers of the game."

To which another commentator responded, "That would indeed be awesome, but it'll never happen. There's too much proprietary code and artwork in modern games for them to ever be released as open source." But OOPManZA came back to that, claiming, "Proprietary code that is abandoned is worse than useless, it's practically criminal..." As the users talk about community, they debate IP, the net's sine qua non.

Will we look back in forty years and shake our heads that online communities did not have rights? I'm not so sure. In a class I'm teaching this semester, Computers & Society, my students claimed that they have very little interest in taking part in deep online communities. Meeting strangers online does not appeal to them. They are even increasingly skeptical about Facebook. Of course, they might be the wrong sample for such a question. Perhaps these kinds of communities only become desirable once people have moved onto working-life and adulthood and loneliness threatens. At the same time, Second Life is a ghost town. Perhaps the whole notion of an online community will be a passing fad.

For all of the players' efforts to save City of Heroes, the closing day finally came. A small online movement will continue to push NCSoft to let players to set up and run their own non-proprietary version of the game, and some players have asked Disney to pick up and continue the property. At the end, players recorded their last minute of play to video. When the plug was pulled, players saw an error message: "Lost Connection to Mapserver."

On the final night of City of Heroes, an in-game DJ span tracks as groups of superheroes danced below. (The song list for the night can be viewed here.) One of the tunes was Goo Goo Doll's Iris. Some felt what the song's lyrics pleaded, "You're the closest to heaven that I'll ever be. And I don't want to go home right now."

The right to gather is something that was written into our Constitution and conversely has been highly restricted in other countries. Gathering and the handling of gathering has a long history in human societies.

The MMORPG game compensates long term attention (a valuable currency in the online world) and in-game success with assets like high level characters and rare gear that only have value online and offline (yes these sell offline too for real dollars) in the context of the game space. These assets are lost in a shut down.

The game creates a commons in which those of similar tastes and motivations gather. There is always pain when these commons are lost to individuals evidenced by protests when family companies close or favorite local retailers or community centers. Oftentimes passionate stakeholders do have some accessible way to acquire and maintain the common space. An example is when employees buy out a family owned company. This accessibility is largely because of the opportunities of physical, geographic and legal proximity.

Gamer's rights may have some market opportunity. If closures were to develop into a trend, a competitive advantage could be created in providing options in my agreements with subscribers as to operation opportunities after shut down by the host company.

The market, as in the case of other common space losses, is the ideal arbiter here. Given the asset value to the individuals within the context of the common space, the market may step in sooner rather than later in guaranteeing these rights.

Great post and interesting topic! As it happens, I'm also interested in this subject, and I often tackle it from a different, but related angle, the responsibilities of people in online communities, by assigning this oldie, but goodie, "A Rape in Cyberspace" from the Village Voice:
http://www.juliandibbell.com/texts/bungle_vv.html

I use it as an example of how rules enter into "frontier" community spaces (virtual or not). I'm not sure of its direct relevance to your points here, but I thought you might find it of use for your Computers & Society course.

Lee, I think there's another potential level to this involving the move toward cloud computing. Let's say your word processor only exists in the cloud (your desktop/laptop/tablet is only a client for a program residing with the WP owner). What happens to your document files if the company in question goes under or decides to stop supporting the WP? Even if you've kept copies of your files on your local machine, will you be able to open/use them after the cloud program is gone?

Or what about hosting data to the cloud? What if a host decides hosting isn't profitable anymore? If it's a straight business decision, then yes, you probably have time to move your data. But what if a Hurricane Sandy floods the server farm and the company decides it's not worth rebuilding?

That said, I have not done ANY cloud computing, so I don't know if hosting companies, for instance, are legally bound to let content owners retrieve their content before quitting the business. But if you're running a word processor on your local machine, you still have a copy of that word processor if the company stops supporting it: You still have what you paid for, though you'll no longer have tech support for it. What do you have if a company stops supporting a cloud-based program?

thnx for the information..
blog is really gud,Help my india is the World Best Forum and Blogging Site which provides the all category of forum and blogging and Social Community site.

This site is very important to gamers. Do you play more attactive game playstation5. Please go to www.ps5info.de/ and play ps5 and I think it is more enjoyable to you.

I definitely enjoying every little bit of it. It is a great website and nice share. I want to thank you. Good job! You guys do a great blog, and have some great contents. Keep up the good work.
website