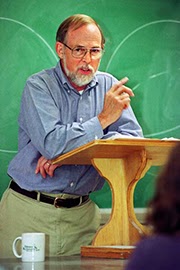 When I sat down to write this post, the challenge of summarizing Dave Lindberg’s life inevitably overwhelmed me. I arrived in Wisconsin’s History of Science department as a grad student about six years after he officially retired. Dave, however, never retreated from department life and I got the opportunity to interact with him. His death was, of course, sad to anyone that knew him—and, no doubt, to the many that knew him by reputation alone—but there’s something particularly tragic about a brilliant mind succumbing to Alzheimer’s disease. Given the nature of the disease, I think it’s especially important for those of us lucky enough to have participated in the community that he nurtured, to record and share our memories of him.


Dave lived in the Midwest for most of his life, growing up in Minnesota, receiving his PhD from the Department of History and Philosophy of Science at Indiana University Bloomington, and spending the rest of his career in the Department of the History of Science at the University of Wisconsin-Madison. His numerous publications contributed considerably to our understanding of medieval and early-modern science, with a special focus on the history of optics and the intersection between science and religion. At Wisconsin, he was instrumental in developing the syllabus and textbooks for large undergraduate survey courses, spanning the classical origins of scientific inquiry up to the development of modern scientific thought.

A few weeks ago, Evan Hepler-Smith posted a piece on this blog—“What is the regional history of American Science?”—that explored the role of place in American science studies. It got me thinking about the Midwestern lineage of American history of science, cultivated in the large departments at Wisconsin, Indiana, and Oklahoma. In my mind, Dave represented a quintessential example of a Midwestern historian of science: catholic in his scholarly interests, he brought Midwestern character to his teaching and mentorship through his generous, patient, and convivial spirit. In my first few weeks of graduate school, Dave made it clear to me that the department was not only a place of academic training, but also a community of friends. He offered, for example, to make me a bookcase one afternoon as I was on my way to the required seminar on historiography and methods. By this time, Dave had been emeritus for years, but his enthusiasm and care for incoming graduate students never diminished. Long before that, he had established the department’s Friday Brown Bag lunch tradition, an informal gathering for students and faculty to discuss the field. He regularly hosted parties at his house with his wife, Greta, and created a fellowship for students interested in science and religion. Dave believed in an academic community that not only fostered intellectual development, but one that thrived when its participants offered each other sincere support in multiple forms.

Matt Lavine—a fellow alumnus of Wisconsin’s History of Science department and current assistant professor at Mississippi State University—recently shared how Dave handled his lecture for an undergraduate survey course on September 11th, 2001:
… [Dave] decided not to lecture on the pre-Socratics that day. I'm sure nobody who held classes was really sticking to the lesson plan. Instead, he gave an impromptu hour-long lecture on the history and culture of Islam. This was four hours into 9/11; nobody really knew for sure who was responsible, but you were already hearing talk about reprisals against mosques or people of Middle Eastern descent or Sikhs mistaken for Muslims. The content of what he spoke about wasn't terribly deep or pointed; it was really just a decent overview. Obviously his purpose was to pour some oil on the waters by reminding his frightened audience of the basic truths of the situation: that "Islam" covered a fantastically large and diverse segment of humanity, that the vast majority of Muslims regarded these kinds of actions as unrecognizable perversions of their faith, that "terrorism" wasn't the simple result of Bad People and Wrong Religion, and so forth.
... I'm sure he did more good just by speaking calmly and objectively about the real human experience bound up in the long history of Islam, trusting his students to put the pieces together for themselves.
There's so much more that can and will be said about the good works he did, most of which he wanted no credit for. He had a lot of truly fine accomplishments. But they happened among hundreds of little moments like this, and in the end I think they were the greater part of his legacy.
I think Matt articulated precisely what I want to say about Dave in this piece. His scholarly legacy is momentous, but he imparted so much more to everyone who was lucky enough to know him. Perhaps it was a Midwestern thing; maybe it was simply a Dave Lindberg thing. Regardless, it was his generous character combined with his intellect that made him a truly outstanding scholar and person.