Synchronicity and Scale in the Logic of the Anthropocene


As I explained in my last post, one of the biggest debates currently engrossing the geoscientific community concerns the concept of the Anthropocene. The Anthropocene is a proposed new geological epoch in which the environmental effects of human activity can be detected in the Earth’s strata and in the atmosphere on a global scale. The epoch has yet to be officially recognized as an epoch by the International Commission on Stratigraphy (the group who has the last word on such matters, at least among geologists), but many scientists have moved beyond questions of whether the Anthropocene exists, and are now interested in trying to determine when the epoch first began.


To determine the boundary between one epoch and another, geologists look for a “golden spike” (known more formally as a stratigraphic signal), or a substantial change in the physical and chemical content of sedimentation from one geological stratum to the next. These changes often correspond to major events in the Earth’s history – the end of an ice age, a mass extinction event, or the appearance of new species in the fossil record. Scientists generally agree, for example, that the Holocene (the epoch in which we currently live, at least as of this writing) began about 11,700 years ago when the last ice age ended, manifested as a change in the chemical composition of layers of ice in the polar ice core.  When they first proposed the idea in 2000, Paul Crutzen and Eugene Stoermer suggested that the Anthropocene may have begun around 1780, when the concentration of greenhouse gases trapped in the ice core increased dramatically. Not incidentally, 1780 was also around the time when humans began extracting fossil fuels (most notably: coal) on a large scale, and the date also stands in for the beginning of the Industrial Revolution.  Because of the standards for epochal boundaries outlined by ICS, however, geologists recently suggested that the Anthropocene in fact may have begun much more recently, and are looking to the mid-twentieth century for a potential starting point. Those who favor this more recent start date are split in their reasoning: The first group, led by climate scientist Will Steffen, argues that the Anthropocene began with the Great Acceleration, or the post-1950 increase in human activities whose effects impacted major Earth systems. (The Great Acceleration could be glossed as “globalization.”) As evidence in favor of this starting point, Steffen et al. point to two sets of 12 graphs. The first 12 graphs track rates of change in particular human activities since 1750 (population, paper consumption, damming of rivers, foreign direct investment, etc.). 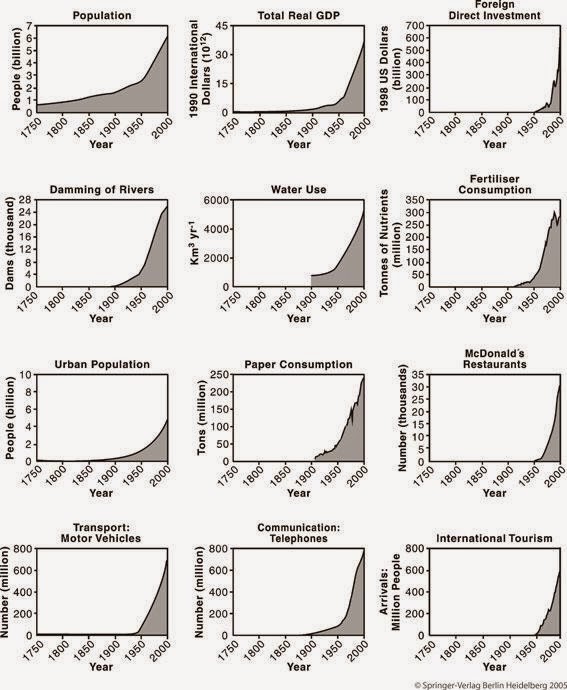 The second set documents changes in major features of the Earth’s systems (atmospheric composition, water and nitrogen cycles, tropical forest degradation) that likely resulted from these increases in human activities. 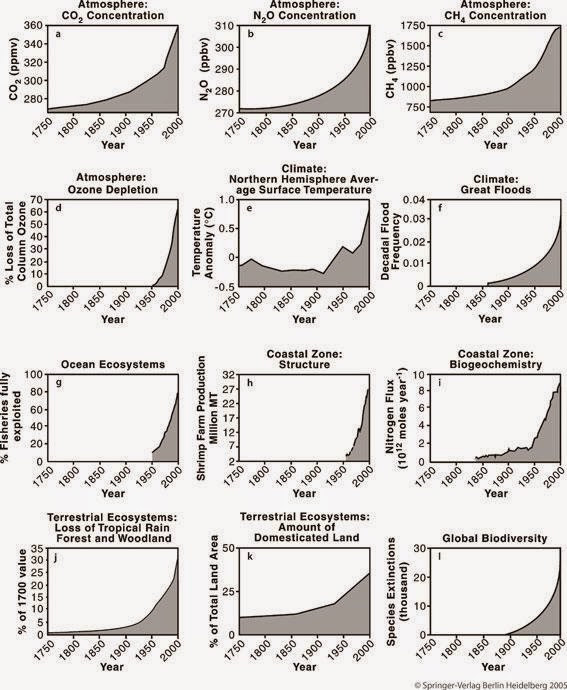 Taken together, these graphs indicate that, while humans in the nineteenth century may have begun to exploit the Earth’s resources in a heretofore unprecedented way, it wasn’t until the 1950s that their impacts were manifested in the Earth’s history. In fact, these geologists argue that the past 60 years constituted “the most rapid transformation of the human relationship with the natural world in the history of humankind.”[1]


The second group, led by geologist Jan Zalasiewicz, does not refute the evidence marshaled by the Great Accelerators, and indeed agrees that globalization gave rise to major changes in the Earth system. They argue, though, that at least according to the geological record, the Anthropocene technically began in 1945, predating the Great Acceleration by several years. In this case, the appearance of manmade radionuclides in soils and in the atmosphere constitute the golden spike of the Anthropocene, and corresponds to the detonation of the first atomic bombs.[2]


If we follow the Great Acceleration group, then the start of the Anthropocene is linked not to one exact moment, but rather exists as a series of closely related events that indicate major global geological and atmospheric changes when considered as a group. If, however, we look to the beginning of the nuclear age, the starting point is incredibly precise: July 16, 1945 at 11:29:21 GMT. This is the moment when the world’s first atomic bomb, known as Trinity, was detonated in Alamogordo, New Mexico. Trinity appeals to geologists because a) it was a singular event, and b) its effects were synchronous on a global scale. It thus fits neatly with the standards for a new geological epoch as defined by the ICS (although, as Zalasiewicz and his group note, it was not until 1963 that the radionuclides were detectable worldwide). In this context, Trinity was an event in the Earth’s history on par with mass extinctions or global warming events—phenomena whose effects were (nearly) immediate and occurred on a global scale.


As a historian, what I find fascinating about the proposal to link the Anthropocene with Trinity is that it casts the history of the atomic bomb in an entirely new light. It requires a reconfiguration in how we think about the scale of the bomb’s effects: In the Anthropocene, not only do we need to grapple with the moral question of the dropping of bombs on the human level, but also on an environmental one—at the scale of the entire globe. What’s more, to introduce the nuclear into a conversation about who is to blame for the Anthropocene is to implicate a set of politics that exist outside of a primarily capitalist framework. Indeed, these geologists reject the Industrial Revolution as the starting point precisely because of these questions of synchronicity and scale: the large-scale extraction of fossil fuels did not begin simultaneously all over the world, but rather emanated out from Great Britain and Europe; in other words, the primary geological evidence of the Industrial Revolution maps onto the trajectory of capitalism, which was not a globally synchronous event. Additionally, while the Industrial Revolution had profound impacts on the face of the Earth, in terms of large-scale shifts in the Earth’s systems, its effects were negligible. Capitalism certainly engendered a rearticulation and reformulation of our ideas about our powers as a species over the natural world. In the logic of the Anthropocene, though, it wasn’t until we became nuclear that we truly became a force on par with nature itself.

Great post! To borrow an entry from this week's links posting, Michael Gordin's essay for the upcoming Histories of the Future workshop begins with a comment on the beginning of the "nuclear age" that speaks to exactly your point about synchronicity. http://histscifi.com/essays/gordin/languages.html

Thanks for the tip, Michael! Wish I could make it to that conference this weekend.

I'm planning on putting a summary up on the blog next week! Stay tuned...