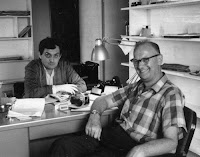 Kubrick and Clarke working on 2001

This weekend, I had the pleasure of watching Stanley Kubrick’s 1968 film 2001: A Space Odyssey in the company of a bevy of historians of Cold War science. One of them, a specialist, as he puts it, in "the human experience in the milieu of space," pointed out the way in which Kubrick and Arthur C. Clarke – the author of the book that formed the basis for the movie – worked closely with engineers at NASA to shape such visions. It seems fair to say that 2001 played an important role in stoking support for the Apollo Program that led astronaut Neil Armstrong to take his momentous “small step” on July 20, 1969.

Why I am telling you this? There could be a thousand reasons. But the one I want to highlight in this short post is about scientists as technical advisers to filmmakers. I’m particularly interested in the role that claims to technical accuracy (not to be confused with T/truth) play in mediating science and fiction.

In my research on the history of cryobiology I have been startled at how often scientists, as early as the 1930s (if not before), were asked to go on set to ensure the ‘accuracy’ of scenes involving attempts at human preservation. For example, in the late 1930s scientist Ralph Willard was credited as a consultant to the film “The Man With Nine Lives,” a medical thriller starring Boris Karloff as a mad-scientist who attempts to freeze humans alive. Willard, who is now viewed as a purveyor of pseudo-science, conducted early experiments with cold-induced hibernation. In the late 1950s, James Lovelock (yes, that James Lovelock) earned a day’s pay by serving as an on-set consultant for the play The Critical Point, which “revived” the effort to depict humans in a state of cryopreservation. Before he came up with his cybernetic Gaia hypothesis, Lovelock made important breakthroughs in the ability to keep blood and sperm functional after exposure to low temperatures. The ability to defrost and revive whole bodies remains controversial and elusive, but is an example that makes it worth asking: What’s at stake for scientists when they participate in the production of fiction? The boundary work of scientists behind the scenes of pop culture is still largely uncharted territory for students of the cultural cartography of science.

I’ll conclude with an example from the present. In the weeks following the release of Steven Soderbergh’s Contagion, a number of the scientists and public health officials who served as technical advisers for the film have used their involvement as a platform for raising awareness about biosecurity and epidemic preparedness. Assuring accuracy in the film both legitimates them as experts and legitimates the film as an extension of that expertise. Time will tell if anyone is taking them seriously and how.

There are many, many more examples. What scientists/films come to mind? What sort of scholarship -- work on nature films, scientists as consultants in other fields, etc -- could one draw on to go deeper into these questions?

The book that immediately comes to mind is Mitman's Reel Nature, which is about wildlife documentaries. This is not quite the same, since these are documentary rather than narrative fiction films, but I think the larger issues translate.

One thing that's interesting here is the history of the genre itself. Early film evolved out of the public lecture, which was a hybrid form of entertainment and education that fit under the umbrella term "rational amusement" in the 19th century. Naturalists and explorers were particularly sought after lecturers. Usually, they would illustrate their tales of adventure and discovery with lantern slide illustrations. Once moving pictures came on the scene, these were quickly incorporated as well.

Not all lecturers were naturalists, of course. But many of them were. What has always struck me is how permeable the boundary between natural history and entertainment was in 19th century america. There was remarkably little boundary work going on! All of that began to change in the 20th century though.

Some of the early nature documentary films were made by naturalists (e.g. at the American Museum in New York) themselves. But by the 1930s the genre had evolved, and scientists played less and less of a role in their production. Part of the story here is technological. An important element was the development of sound film. As audiences began to expect spoken dialogues, films had to be shot in studios rather than on location. Scientists objected, because that entailed re-creating nature indoors, which they judged less authentic than capturing it on location.

But another innovation was generic. Nature documentaries came to resemble narrative fiction ever more closely, in the sense that they featured a small number of main protagonists, dramatic tension, a denouement followed by its resolution, etc. Again, these demands on plot even in films about non-human animals alienated scientists, who again worried that the public were not being shown an authentic vision of the natural world.

A quibble: 2001 came out in 1968, not 1964, so while the film surely helped stoke already substantial interest in space travel, it would be difficult to discuss its effect on support for the Apollo program, especially since the program's budget was cut only a couple of years later.

Hi Will: thanks for catching that typo (I have corrected it) -- as to my bold claim, you are right in terms of *financial* support. By 'support,' I was gesturing also to public interest. Either way, this makes the questions of what's at stake and where to look for the outcome of scientists involvement in fiction all the more complex and interesting. Thanks for reading.

Right on, Joanna! This post characterizes the fascinating link between the space community and Hollywood very well. Ever since Wernher von Braun's work with Walt Disney in the 1950s (and probably before), there have been fruitful collaborations between rocketeers and filmmakers, which have shaped both elite and popular expectations of what space travel can achieve. An American-Soviet joint space mission depicted in the 1964 novel, MAROONED, gave rise to a NASA-supported 1969 Hollywood film, and then, in a bizarre case of "life imitating art," an actual space mission flown in 1975. (The realistic cinematic depiction of astronauts and cosmonauts working together swayed both NASA and Soviet space authorities.) And there's no doubt that Kubrick's film was extremely influential to directors, audiences, and even NASA insiders. In Francis French's and Colin Burgess's IN THE SHADOW OF THE MOON, Apollo 8 astronaut Bill Anders recounts finding the actual Moon to be something of a disappointment when he saw it up-close in December 1968. 2001, released months earlier, had conditioned him to expect dramatic, jagged peaks and valleys: a place worth visiting. The vision of the future the movie represents remains captivating even today.

I just read an announcement for the 2012 Oral Roberts University Science and Science Fiction Conference, 'When Worlds Collide: Science, Faith, and the Imagination.' According to the CFP, the meeting will explore the relationship between science and science fiction in a two-day interdisciplinary event. I thought I'd share the link here:
http://lxsrv7.oru.edu/~alang/sciencefiction/

Ask and ye shall receive: David Kirby's new book _Labcoats in Hollywood_ (MIT Press, 2011), not only examines the phenomenon of scientists as cinematic consultants, but analyzes 2001! Looking forward to reading it and will post a review.