Hank 9:20 AM No Comments
Tweet
Last weekend, I co-organized Princeton's American Studies Graduate Conference. Our topic was "Science and Religion in America," and we had twelve papers, four panels, two keynote addresses, and one great Cheselden print: 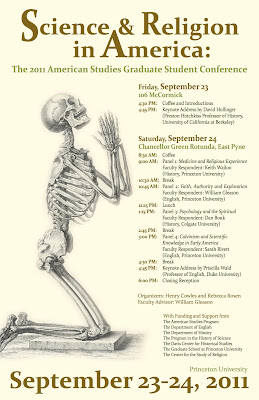 Our chronology ranged over three centuries, and participants' disciplinary identities spanned history, religion, anthropology, political science, and integrated science studies programs at a variety of American institutions.
As you might be able to guess, given this range of interests and the broad nature of the theme itself, there was lots in the air over our day and half together – too much for one blog post (even if that blog post's written by me).
Rather than try to tie everything together, what I'll do here is just point out two of the major themes that emerged over the course of the conversation, and highlight a thematic arc connecting the two keynote addresses.
Authority – in many ways the ur-theme of the study of the relationship between science and religion – kept coming up throughout the conference, from historical appeals to authority to the use of authoritative rhetoric.
It was especially prominent in the second panel. There, the relative authority of science and religion was reframed as performance: from Scopes to spaceflight, it was less what was appealed to than how the appeal was made.
This leads me to the second theme I'll highlight: Narrative. From Anne Harrington's notion of "scripts" to the power of storytelling to change the world, narrative proved a central, though often subtle, analytical category.
Two papers on Puritans really brought this home. By fleshing out the Empiricist roots of the justification of confessional narratives as evidence in witch trials, both papers helped recast Perry Miller's take on the Puritan mind.
Finally, a word on a connection between our first keynote (by David Hollinger, on William James and twentieth-century Protestant thought) and our second (by Priscilla Wald, on normative narratives in a genomic age).
Hollinger tracked James' legacy amongst ecumenical Protestants who at first rejected, yet ultimately returned to, Jamesian abstraction, while Wald connected myths and anxieties about biotechnology and selfhood.
What helped bridge – or perhaps differentiate – the two was their orientation. While Hollinger only hinted at liberal Protestantism's future, Wald insisted on the need to change our narratives – and thereby, the world.
It was an interesting, and idealistic, end to an excellent conference. When pressed on just how much control anyone has over the myths that undergird our age, Wald simply expressed a faith that writers must have it.
For my part, I doubt there's much we can do to balance the news media's power over public opinion. If not science or religion, then we need a way to find the grounds for narrative authority today. Philosophy, anyone?