Home » Unlabelled » Ease on Down Them Cyborg Highways . . .

Ease on Down Them Cyborg Highways . . .


Last week’s announcement that Nevada had OK’d Google to license driverless cars in the state reminded me of another story from last year in which an agency within the US federal government claimed that cell phone use is addictive. As autonomous vehicles and partly autonomous technologies—such as frontal crash warning systems that apply the brakes for you if you are about to rear-end someone—continue to improve, advocates of these technologies may well see opportunistic advantage in current talk about distraction and distractibility. 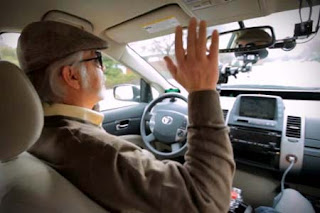 I am particularly interested in what historians of science and technology and STS scholars have to add to these debates. More specifically, when I read and hear news stories on these topics, I see a dynamic that has become a central obsession of mine, and  which forms the basis of my book manuscript on the history of auto regulation. As we redefine how we understand problems, we also often change our notions of how to solve them. Shifting scientific notions of risk and of human nature often play an important role in reframing problems; they also play an essential part in how we conceive of solutions. In the instance of cell phone use, by intensifying this pre-existing image of our addiction to electronic devices, federal agencies can establish two things simultaneously: ideas of the distracted driver as a delinquent person who risks the lives of others and notions of how to remedy this perceived threat.  In our current situation, distraction (could) = autonomous vehicles (read, robots)—well, potentially . . . if actors, powers, and forces align to make it so.

Here are some thoughts on how our current discussions play out against a historical backdrop.


During the week of December 13th, 2011, the National Transportation Safety Board (NTSB), after months of study, recommended a total ban on cell phone use by drivers.  The National Highway Traffic Safety Administration (NHTSA) blamed distracted driving for 3,092 deaths in 2010. A government report estimated that 120,000 drivers sent text messages daily in 2010, a one-year increase of fifty percent. In this context, various interest groups and government agencies have called for increased scrutiny of cell phone use in cars. Of distracted driving, Robert Sumwait, a member of the NTSB, said, “This is becoming an epidemic.”

Unwittingly perhaps, Sumwait echoed sentiments that were embodied over fifty years ago in Daniel Patrick Moynihan’s 1959 article “Epidemic on the Highways.” Moynihan explored the phenomenon of crash deaths through the metaphor of disease, and the article had an important influence. It was part of the movement—along with Ralph Nader’s more famous book Unsafe at Any Speed—that led to the adoption of federal safety standards in the United States in 1966. Other metaphors for death by automobile have abounded throughout the years. Early after the car’s introduction, people cast it as the “Devil-Wagon” that would tempt young, virile (and rich) men to speed recklessly, endangering themselves and others. During the 1960s, politicians, including President Lyndon Johnson, repeatedly pointed out that more people were dying in automotive accidents than in the Vietnam War. Viewing traffic deaths as a public health issue has always held a certain power, however; it enabled federal control to enter new, previously sacred and sovereign, spaces. Metaphors of health have repeatedly taken center in debates over automobiles. The dual movement of medical knowledge and power reached its culmination when President Johnson appointed a medical doctor, an epidemiologist, to head the nation’s first federal auto safety agency.

The NTSB’s recent rhetoric reflects a very particular kind of medical metaphor, however, namely that of addiction. “[Distracted driving] is becoming the new DUI [Driving Under the Influence],” Robert Sumwait said. This turn to addiction allows safety advocates to draw on a long history of combatting drunk driving, which was seemingly born with the car. (Was there an earlier tradition of taking the horse or the sleigh for a late-night, drunken joyride?) From the automobile’s earliest days, people associated it with dangerous risk-taking of drunkards. While states and localities passed many anti-drunk driving laws in the first half of the 20th century, it was not until the 1980s that organizations, such as Mothers Against Drunk Driving, began to form around the issue. Drunk-driving attained a new, heightened level of public consciousness. Meanwhile, over the course of the 20th century, experts and advocates, spurred on by groups such as Alcoholics Anonymous, began to envision addiction in medical terms. 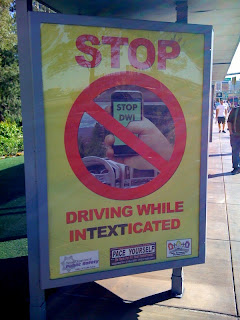 Popular media often describe people’s relationships to their cell phones and other consumer electronics as one of “addiction” or “dependence.” People winkingly refer to their Blackberry smartphones as “Crackberries” and recount stories of children throwing tantrums on vacations while experiencing digital withdrawal. Billboards throughout the United States proclaim, “Don’t drive while InTEXTicated.” The National Safety Council, which has been addressing road safety since roughly 1919, began a billboard campaign called “Death by Cellphone” that features photographs of people killed by distracted drivers.

Policy makers marshal a number of social and biological sciences, from neuroscience to psychology, to create a “scientific” characterization of driver distraction. While this discourse views distraction as nearly universal human trait, the sciences equally paint the image of the distracted driver as a kind of person that requires restraint. It is particularly interesting to think about how sciences from the neuroscience-behavioral economics-Nudge nexus (previously discussed on American Science here) may play a role in shaping discussions of these issues.

For now, the NTSB is relying on the age-old methods of moralizing and public shaming to dissuade distraction. Deborah Hersman, the chairwoman of the NTSB, likened distracted driving to cigarette smoking. “We have to get to a point where [distracted driving] is no longer in vogue,” she said. Yet, she also added a stronger admonishment, “If you can’t control your impulses, you need to lock your phone in your trunk.” Stronger nostrums are on the horizon, however. If the NTSB were able to encourage Congress to set a nation-wide ban on cell phone use—which is highly unlikely for both political and constitutional reasons—we can imagine a host of technologies being brought to bear on the problem: including surveillance systems and perhaps even in-car cellphone jamming devices. The promise of automated, robotic cars lies off in the distance, but is already being studied for its safety potentials by the Department of Transportation. Someday, the problems caused by our personal cellphones could be solved by another technology, our own personal robot chauffer who will drive us quietly, safely, and peacefully down the cyborg highway.

The NTSB’s endorsement of a total ban of cell phone use while driving lit up the blogosphere. Conservative writers reacted with mockery and scorn. The picture of the open American road and the private car speeding down it has long been useful to and lucrative for auto companies, filmmakers, and, with the coming of NASCAR, media and sporting companies. But some subcultures and people have embraced the car’s supposed liberating potential, and if federal agencies begin to frame distracted driving as addiction consistently, we can imagine how the lines of battle will shape up. In the present political climate of Tea Partiers and anti-government vitriol, the issue of distracted driving could provide a rich and bloody battleground between freedom-lovers and nudge-artists.

Thanks Lee. Are advocates of driverless cars in *fact* drawing on the biologized/pathologized/medicalized rhetoric surrounding distraction? That would be a pretty interesting development, and would link up the two stories you began with.

Also, what's the connection (if any) between those proffering a driverless vision a la Minority Report and those simply opposed to individual automobiles and in favor of improving and expanding light rail and other forms of mass transit?

I ask because I think you're right that driverless vehicles does occupy a middle ground in terms of autonomy between cars and trains (or whatever). If advocates of driverless cars were teaming up with advocates of light rail, that might complicate that spectrum in interesting ways. Any thoughts?

Hi, Hank. I've only heard advocates of driverless cars call upon the distraction argument in conversation. In the same conversation—a meeting of LessWrong—people pointed out that driverless cars are far more fuel efficient than human drivers. And engineers are exploring the driverless caravan option (http://wardsauto.com/ar/driverless_car_test_101201), in which cars would align on the highway and essentially draft off of each other. Drivers might still maintain control off the highway. This choice would greatly increase fuel efficiency on the highway.

What I find again and again in my research is that US advocates of re-making or regulating the car do not engage with advocates of decreasing car use (an option that was virtually left off the table in 1970s auto policy discussions). Yet, we all know that there are lively communities—especially urban communities—dedicated to doing away with the car. If, for instance, LessWronger autonomous car advocates and urban anti-car folks came together under the banner of some interest group, would we experience a differently shaped regulatory environment? Maybe. But that would be quite a departure from the US norm.