Hank 10:40 AM 2 comments
Tweet
We asked Myrna Perez, whose work focuses on the public role of evolutionary biology during the last quarter of the twentieth century, to reflect on that topic in a post. She's currently writing a dissertation about Stephen Jay Gould; you can find out more about her work here.

What is so compelling about returning to our evolutionary origins? Why do we think that getting back to an earlier period in human history will make us healthier, happier and more fulfilled? In Wednesday's post, Lukas explored the appeal and historic origins of “paleo-diets” in order to make the intriguing suggestion that our attraction to these evolutionary narratives reveals a kind of ambivalent anxiety about modernity.

When I think of these “cave-man diets” I’m struck by another aspect of this evolutionary origin story: namely, what they imply about human sex difference. The image of the cave-man offers a certain type of uncivilized, rugged masculinity – one that has been hemmed in by the advent of agriculture, domesticity and the trappings of urbanized, modern life.

Of course, it’s not only men who follow paleo-diets. But it would be hard to deny the slant toward men for this protein-focused, weight-lifting, and wild-man-creating diet and exercise regime. In the logic of the “cave-man diet” men reach their fullest potential by shedding the cloak of civilization in order to return to a purer, more natural state of being.

Now, I’m fairly sure that there isn’t space in a blog post to get to the bottom of the relationship between evolutionary theory and modern gender dynamics. But what I would like to explore is the pervasiveness of the gender and sexuality models coming out of much of evolutionary psychology for the past several decades, by looking in one surprising place: the popular sub-culture of American evangelical Christianity.


Evolutionary psychology is most often understood as opposing (or at least the opposite of) religion in American culture. After all, it seeks to understand contemporary human social behavior as a collection of evolved adaptations, with no reference to divine agency or supernaturally-gifted morality. As a research agenda, it has suggested powerful explanatory perspectives for much of human sociality.

And its popular appeal is documented by a cursory glance at the science section of any mainstream news outlet—here, and here. These popular articles often suggest that evolutionary psychology has unlocked the key to human sex difference, mate choice and sexuality—men have a hard time with commitment because sperm require little investment and must be spread around. The female orgasm is an adaptation to secure fertilization. And so on.

But since its origins in the 1970s, evolutionary psychology has been heavily criticized for offering what many see as deterministic models for human behavior—particularly these pronouncements on human sex difference and gender roles.

It’s clear that evolutionary explanations have captured the attention of scientific,  humanistic and popular discussions of human sex and gender. What does this have to do with American evangelicals? Intrigued by a surprising set of parallel arguments and imagery between the “cave-man” of evolutionary psychology and a rugged wild-man in recent versions of evangelical pop-theology, I wondered if there was something more than a shared set of culture images. Turns out there are some interesting connections.

But first, what are these books?

One very successful and powerful articulation of this growing masculinity narrative is found in the writings and ministry of John Eldredge. His 2001 book Wild at Heart: Discovering the Secrets of a Man’s Soul spawned a booming cottage industry of other books (including some for women), bible studies, and camp retreats (here's an advertisement) that distill a version of rugged-man masculinity for evangelical popular culture. 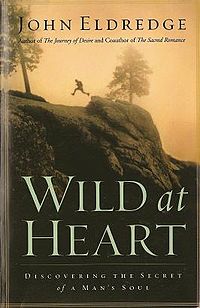 The language in Eldredge’s writing is strikingly reminiscent of the late nineteenth-century wilderness cult that Lukas introduced in his post. Vigorous health and true human nature can best be found by going out into the wild; Eldredge argues the “wild” is at the core of true masculinity—“adventure, with all its requisite danger and wildness, is a deeply spiritual longing written deep into the soul of a man. The masculine heart needs a place where nothing is prefrabicated, modular, nonfat, zip lock, franchised, on-line, microwavable.”

These feminine and feminizing are the elements of modern life that prevent men from being who they are truly meant to be. It is only fear, Eldredge claims, that keeps men at home, “Deep in a man’s heart are some fundamental questions that simply cannot be answered at a kitchen table… It is fear that keeps a man at home where things are neat and tidy and under control.”

As with the paleo-diets, as with the wilderness man, there is a deep sense that somehow civilization has violated the essential nature of a man. All throughout Eldredge’s description, there is the distinct implication that men have been feminized by the domestic space—a space in which they cannot truly be themselves—“ the core of a man’s heart is undomesticated and that is good. ‘I am not alive in the office, ‘ as one Northface ad has it…. Their conclusion? Never stop exploring.” The encouragement to meet rugged wilderness from the outdoor-sport company Northface is a touchstone for this return-to-nature ideal.

Now, books such as Wild at Heart do not suggest that men are most fully themselves out in the woods because of their evolutionary origins, but rather because they are created by God to want these rugged adventures. In this view, outdoor sports, nature walks and following rivers to their end, are ways of fulfilling a man’s ultimate God-given identity and purpose. Eldredge, for instance, argues that men are “wild at heart” because of where Adam was created, “Eve was created within the lush beauty of Eden’s garden. But Adam… was created outside the Garden, in the wilderness… Man was born in the outback, from the untamed part of creation… And ever since then boys have never been at home indoors, and men have had an insatiable longing to explore.”

Eldredge’s drawing on Genesis rather than Darwin suggests that all this may actually have very little to do with evolutionary psychology. After all, it may come as no shock that evangelical Christianity expresses a hetero-normative and binary view of gender identity. However, at least on a superficial level, there are intriguing parallels in the appeal to “the wild” and “wilderness”—and I am excited by the possibilities of exploring further the similarities in “cave-man” and “wild-man” imagery in books like Eldredge’s and in their evolutionary alternatives.

Additionally, it seems very possible that Eldredge drew upon the adolescent development model advocated for in Michael Gurian’s 1999 book A Fine Young Man, in the development of his view of Christian masculinity. 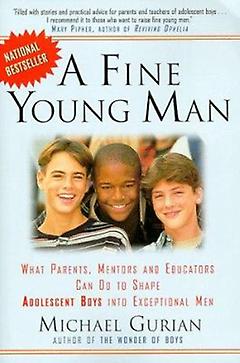 Not only does Gurian argue in the same fashion as Eldredge that feminist cultural elements have eroded the essential nature of young men, both Gurian and Eldredge fashion a masculine ideal that is described in the former as a “warrior-artist” and the latter as a “warrior-poet”.

An even more compelling reason to continue exploring this connection comes from a distinct irony—that is, American evangelicals have not been known as the champions of Darwinian evolution. A recent Gallup poll reports that forty-six percent of Americans believe in creationism over any type of evolution. This fact alone should make us wonder how and in what way evolutionary narratives have been so appealing in American society over the last few decades.

Martha McCaughey, a feminist scholar and cultural anthropologist who has explored the appeal and influence of the “cave-man,” suggests this form of masculinity largely owes its success to the strength and authority of the Darwinian evolutionary narrative in contemporary American society. In her view, evolution has replaced our religion, and so men find their identity as Darwinian cave-men. Perhaps evolution has won out in academic circles, but this hardly seems the case for most of the country. Is it possible that evolutionary psychology has reached unintended audiences through the Christian ministries of authors like John Eldredge?

So to return to the initial set of questions—what is so compelling about our pre-historic origins that they have life in gay-rights activist Dan Savage’s arguments against monogamy, as well as evangelical Christian views of sex difference?

Perhaps the answer is blindingly simple: an essentialized view of human nature, whether inherited from an evolutionary past, or given by a Creator in Genesis, is comforting, powerful and appealing. It sets aside the process of framing and constructing gender—making sex difference natural and straightforward.

Nevertheless, for scholars interested in historicizing evolutionary psychology, there is much fruitful ground to be gained by looking into the reaches, influences and permutations of this current expression of the fundamentals of human nature.

This site gives the best of to the people who are intrested in getting to know how the origin of life got evovled. so keep abreastof this site
Thanks & Regards
Escort Barcelona

"Why do we think that getting back to an earlier period in human history will make us healthier, happier and more fulfilled?"

In my opinion, life is meant to be lived moving forward. Especially in evangelism, there is a better way of doing it than to be afraid of getting prosecuted because of sharing your faith to others. I think that is so 90's.

Everyone has the freedom to share beliefs, as long as we don't shove it to their throats.