Epimemetics and the "Selfish Gene"

That's the title of a controversial new article by David Dobbs. In it, he argues that the "selfish gene" (coined by Richard Dawkins in 1976) represents an outdated gene-centric approach to evolution. Instead, he says we need to focus on things like gene expression and genetic accommodation — things the "selfish gene" covers up and under-emphasizes.

Dobbs has been criticized for his biology (e.g. here and here and especially here), and he's responded in an interesting way: "my challenge," he writes in a follow-up post, "was less to an [sic] technical account of nature than to a metaphor and story used to describe those technicalities." He's against the "selfish gene" not for what it represents, but for its power as a "selfish meme."


While some have pointed out that Dobbs is having it both ways — and, to a certain extent, Dobbs acknowledges this — I want to take seriously his claim that what matters is less the selfish gene itself (or The Selfish Gene the book) and more the "selfish gene" the meme. Below, I'll suggest why "meme" is an inappropriate way to frame the issue, and how history might provide another path.

First, let's separate a few meanings of the "selfish gene." There's The Selfish Gene, a bestselling book by Richard Dawkins published in 1976. In it, Dawkins insisted that the gene — rather than the individual, the group, or the species — was the unit of selection in evolution. According to Dawkins, whichever unit natural selection "selects" will tend to become, as he put it, "selfish."


Beyond the title of the book and the ideas behind it, however, is what Dobbs is calling the "selfish meme": that is, the phrase "selfish gene," which has taken on a life of its own, both within biology and beyond. It's this meme, according to Dobbs, that has tended to obscure the complexity of the interactions between genes and environment that many biologists find interesting.

Dobbs makes this point at the very end of the original article, though in his follow-up he insists that it's the heart of the matter. Given that the headline says the metaphor is "wrong," Dobbs does seem to be backpedalling a bit. But headlines often overstate. As someone put it on Twitter today (though not in response to Dobbs, at least as far as I know): 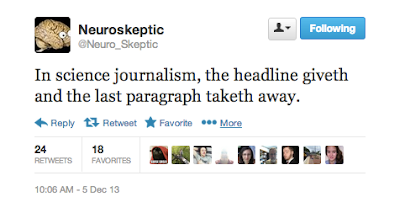 Part of what I want to say is about this "science journalism." Both Dawkins and Dobbs are, in the words of the comment above, "pop science communicators." Both are concerned with the public understanding of science (indeed, Dawkins held Oxford's Simonyi Professorship for the Public Understanding of Science until 2008), and this is, Dobbs insists, what his article was about.

Unlike Dobbs, however, Dawkins is also the author of (much of) the science he is communicating to a wider audience. This dual identity makes The Selfish Gene a hybrid of the sorts. It also places a unique sort of pressure on his word choice, as his phrases are liable to be taken up in both scientific research and the wider reception of (and interaction with) that research. We  should all be so lucky.

This hybridity is, I think, the source of much of the current confusion (and frustration). Dobbs and his followers insist that he was attacking the "selfish gene" as a meme (and Dawkins-as-communicator), while Dawkins and his followers have pilloried Dobbs for failing to understand (or, in some cases, even read) the book at all — fixating, instead, on its title alone. 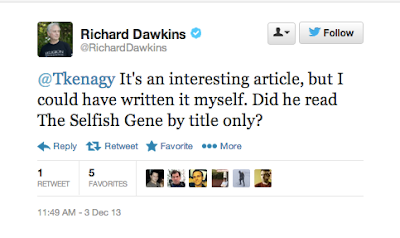 While Dobbs no doubt read more, many people haven't. Dawkins knows this, and admits that the title "might give an inadequate expression of its contents." After all, "selfish" calls up a lot more than "that which is selected in evolution." Given that it was in this very book that Dawkins introduced the "meme," you'd think he'd have taken his title's memetic potential more seriously.

But here's where I want to push back. To a certain extent I like Dobbs's emphasis on the "selfish gene" as a "selfish meme," since it forces us to think of alternatives that are just as catchy but might better capture the direction of evolutionary research today. But I also want to resist the memetic move: I think it's an error to use meme-centric history to critique gene-centric biology.

Why? Not because I don't think there are such things as "memes" (I'm agnostic). Rather, just as Dobbs insists that the interesting story in biology today has more to with epigenetics than with "the gene," I think a better account of the rise of the "selfish gene" would deal with its interactions with other cultural elements and the environment that enabled its success. Call it "epimemetics."

A good "epimemetic" account would go beyond the fact that the "selfish gene" emerged at a time when "our understanding of genes was itself relatively simple." It would uncover what was at work in the wider culture of the 1970s and 1980s that enabled its succes. What were the assumptions, the needs, the prior understandings and public debates that contributed to its "going viral"?

After all, if something like "genetic accommodation" (which Dobbs describes in the article) is more widespread in the natural world than we thought, then its equivalent—"memetic accommodation," in which environmental shifts produce changes that then feed back into the reproduction of our cultural heritage—must be widespread indeed. What would such a study look like?

To my mind, it could fit right into Daniel Rodgers' Age of Fracture. If Rogers had included a chapter on biology, it almost certainly would've been on Dawkins and the disaggregation of the individual. And, given how Dawkins used the "selfish gene" to explain unselfish behavior, it would've had the same counterintuitive ring as Rodgers' analysis of the "communitarianism" of John Rawls.

In one sense, historians already do "epimemetics," even if they don't frame it as such (and I'm glad they don't). After all, Lovejoy himself looked past his infamous "unit-ideas" to the conditions that shaped them in particular periods. There's something satisfying in seeing how biologists do the same: looking beyond elementary "units" to see connections and feedback at the root of life itself.

Rather than stop where Dobbs does (insisting that the "selfish gene" had its day but now it's time to move on), I see this as a call to do more history. Why did it have its day — and how is our day different? If we can integrate that sort of history into the way we teach science, we'll build a better sense of why certain ideas took off (and slowed down) than we will by calling them "viral."

Problem with Dobbs's article was that he never clearly explained 'gene expression'. GE is itself done by proteins that have their own set of genes. Obviously the environment acts on the genes to silence it but silencing is done by complicated processes involving various networks that were coded by DNA itself. There were various networks that didn't do silencing or reading well enough and hence were not selected. Its interesting that even after knowing all this Dobbs chose not to mention it, possibly in order to make the article controversial and hence popular.

Well i am visiting your blog regularly.. I can many regular updates which is useful to me.i love to learn more from your blog in future updates. thanks for sharing.