David Roth Singerman 10:52 PM 2 comments
Tweet
One frigid February evening, I arrived home from a long day of dissertation-writing and fellowship-applying at my MIT office, and settled down with some kind of takeout to watch the latest episode of FX's "Archer." I thought I was done with the history of metrology for the day. I was so wrong. 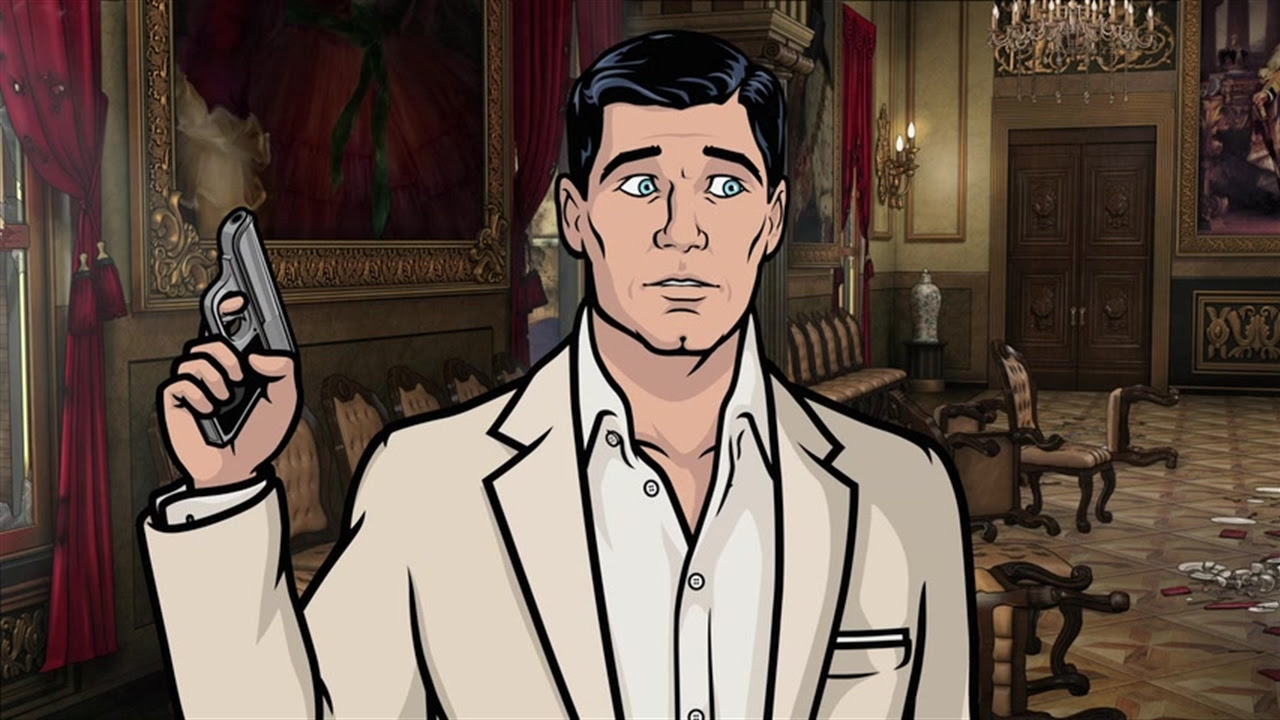 For those of you who don't know "Archer," it can be a little difficult to describe. It's an animated spy spoof, set in a quasi-1960s world in which the private espionage contractor of ISIS (International Secret Intelligence Service) battles the KGB. But ISIS's agents have desktop computers and visit moon bases. To call this anachronism would miss the point; it's intentionally surreal and viciously funny. Think one-third "Get Smart," one-third "Adult Swim," and one-third "Arrested Development" (with whom it shares a creative team), and you'll get an idea.

Among the protagonists (all wild alcoholics) are Mallory Archer, the owner of ISIS; her son Sterling, simultaneously a narcissistic fool and the world's greatest secret agent; his ex-girlfriend Lana Kane; the ISIS accountant, Cyril Figgis; and the HR manager, Pam Poovey. The best character is a mad scientist named Krieger, who may or may not be a clone of Adolf Hitler. The show's writers are particularly famous for having these characters make endless witty references, not just to contemporary culture, but to obscure parts of it.

In the latest, fifth season, the showrunners got bored of secret-agent storylines; ISIS got shut down by the Feds and the gang became fugitives, strapped for cash but with a thousand kilograms of cocaine to unload. By the fourth episode, they've sold some of it, but Pam has eaten much of the stockpile. The cold open shows Cyril presenting their predicament.

The metric-system jokes begin immediately. But it's easy to make fun of the United States's obstinance.

Cyril: From our initial supply of one thousand kilos of cocaine—
Archer: Hold on, dummy, we had a ton of cocaine¡
Cyril: Well, we had a "tonne," t-o-n-n-e, also known as a metric ton.
Mallory: Pssh! Metric, who uses metric?
Lana: Every single country on the planet except for us, Liberia, and Burma.
Sterling: Wow, really? Because you never think of the other two as having their [censored] together.

My own work is about the links between the measurement of nature and of economic value; in my dissertation, and in a forthcoming article, I write that "the history of capitalism is a history of struggle over the terms by which to evaluate human labor and the products of nature." It would, possibly, be too much to suggest that's what the "Archer" writers meant by the following pun:

Cyril: As you can see, we're already down to 125 kilos of cocaine, which was worth about six million dollars—
Sterling: And, wait, how much is that in pounds?
Cyril: Forget pounds! We're doing kilos!
Sterling: No, I meant pounds—
Mallory: Sterling!
Sterling: Exactly! As in "Doctor Who" money.

But shortly thereafter—through cartoon logic too convoluted to explain—Mallory comes to a conclusion about what to do with Pam. And this is where the episode just got weird.

Mallory: We throw her a party! With an enormous cake! Cyril, can we spare another five pounds of cocaine?
Lana: Mallory!
Mallory: 2.27 kilograms, then. Who are you, Thomas Corwin Mendenhall?
Sterling: Ha! Right?

Of course, I knew—but it's my job. In fact, I had spent an entire cold, dark, rainy, fruitless week in Mendenhall's papers at the American Physical Society in College Park, Maryland, in the winter of 2005/6. Mendenhall was an American physicist in the late nineteenth and early twentieth centuries, who spent most of his career performing fundamental metrological work, determining ever-more-precise values of such quantities as solar wavelengths and the Earth's mass. In 1889, he became superintendent of the U.S. Coast & Geodetic Survey, responsible for maintaining the accuracy and consistency of the government's weights and measures, a topic addressed in Article 1, Section 8 of the Constitution (not to mention Deuteronomy 25:13-16). It was during his superintendence that Mendenhall issued the order that officially calibrated all Federal units, even English ones, to the metric system. (If the joke is "about" anything, it's about this Mendenhall Order.)

Mendenhall circulated his order just a month before the World's Columbian Exposition of 1893 in Chicago. Alongside the Exposition's pavilions, canals, and sadistically murderous hoteliers, numerous international scientific congresses met in an attempt to settle once and for all the values of fundamental units, particularly but not only new and disputed ones dealing with electromagnetic phenomena. It is no joke to say that an important part of agreeing on a fundamental unit was to agree on its name; nomenclature, as Evan can tell us much better than I, is a crucial means by which scientists from astronomers to atomic physicists claim priority, credibility, and facticity.

And indeed this is what I, anyway, mostly remembered Mendenhall for. My week spent in his papers was fruitless; there was nothing about the domestic electrical meter, the subject of my undergraduate thesis. But there was this letter, from Mendenhall to Arthur Gordon Webster, a polymathic physicist at Clark University, on May 13, 1893. At stake was not just names, but the orthography of names. "I have not failed to observe, as you suggest," Mendenhall wrote to Webster, "that the English write 'metre.'"

I have noticed, also, that they write 'annexe', 'honour', 'jewellery', and 'shew'. (The spelling 'dogge' has gone out, even there.) They also wear their trousers turned up on the street, and, I am informed, now wear pink shirts at afternoon weddings. I see as good reason for our imitating them in one practice as in another. Like yourself, I am no advocate of an 'American' spelling unless a decided advantage can be shown to exist, but I see no reason for doing a thing simply because the English do it.

Such was the spirit of internationalism that surrounded world's fairs. As Ken Alder has recently argued, the nineteenth century's scientific congresses were junkets just as today's are: excuses for  scientists to see colleagues and have a good time in a new city.

What to make of all this? It appears to be humor week on the blog, and like Jenna yesterday I’ve found humor important for understanding the past. I don’t just mean as source, but almost as analytic—it’s important to recognize when a story from the past is absurd, since contemporaries often did.

In any case, the Mendenhall joke raises two lines of historico-philosophico-comedic questions for which I don't have good answers. One is practical: how is a joke about an obscure figure from the history of American science conceived? (Did the writers start with the Wikipedia page for the metric system, and work outward? Had one of them taken an undergraduate class in the history of American science?) I tried getting in touch with an "Archer" writer in order to talk about how the show's more obscure jokes get written. After much trawling, I found contact information for just one—an Emerson student who had submitted a particularly good spec script. From her, I learned that the Mendenhall joke was written by none other than Adam Reed, the show's chief creative brain. But that's as far as I got. If anyone has an in with the "Archer" team, please let me know in the comments.

Second, and perhaps more troublingly, is the humor equivalent of the question about the tree falling in the forest. If a television show makes a joke that almost nobody except historians of American metrology is able to "get," is it even a joke at all?

Hah! This is great. Regarding Mendenhall's letter: one thing that I've noticed in studying fin-de-siecle nomenclature debates - chemical ones, anyway - is that while the high-level European meetings focused on matters of vocabulary and orthography in the abstract, Americans tended to be quite concerned about matters of spelling and pronunciation. On the one hand, this presumably reflects the difference between negotiating inter-linguistic standards and putting them into effect in a particular language. On the other, it perhaps also indicates a greater heterogeneity within scholarly American English than within the language of scholarship in France, Germany, or Britain (notwithstanding the diversity of dialects in each of these nations).

As for the Mendenhall reference - maybe the "joke" works for viewers other than David Singerman as a simple high-low: it's funny that numbskull Archer gets what is clearly an obscure reference. Obscure references are a stock-in-trade of the humor of these kinds of shows, right? I resisted watching Arrested Development for a long time because of my mild irritation at the constant barrage of references to "huge tiny mistakes" and the like.

It's perhaps worth reflecting on the image of history of science (history in general, really) that this projects: a huge library of facts and names, fodder for esoteric references suitable for any topic. Not the way of thinking about the past that most of us historians practice, or that we wish to encourage in our students and readers.

There's another example of pop-culture historical humor that takes a different approach to stories about the past: web hit-turned-Comedy Central series Drunk History. For those who aren't familiar with Drunk History, here's the gist: an obscure comic drinks a whole bunch of booze, narrates a historical episode, and familiar actors hilariously act out the narrator's story, complete with hiccups, drunken tangents, memory lapses, and so on. As historiographic method, it's perhaps not to be endorsed. But what I like most about these stories is the they are clearly *arguments* - the drunken vehemence of the narrator makes that clear. While a reference to a historical fact or name might be the most overt and recognizable genre of incidental public history in pop culture, people are constantly hearing and making historical arguments, often without knowing it. I am all for jokes and storytelling that help illustrate this.

Speaking of nomenclature and jokes, here's one from an 1890 issue of the Chemical News, in reference to a couple of suffixes used in numerous chemical names:

"It would be better still if the terminations 'in' and 'ine' could be dispensed with, since they have been seized upon by the inventors of 'proprietary' medicines and applied to compounds which, whatever may be their medicinal value, are certainly not chemical individuals. "Listerine" is a name which sets our teeth on edge.""