The Marketplace of Ideas 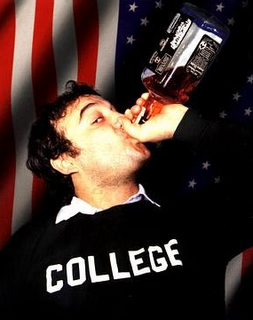 David Brooks wrote a column in today's NY Times about the deplorable state of higher education in the United States.  "Colleges are supposed to produce learning," he says.  "But [a recent study] found that, on average, students experienced a pathetic seven percentile point gain in skills during their first two years in college and a marginal gain in the two years after that."

The study that Brooks refers to is a new book called Academically Adrift by Richard Arum and Josipa Roksa.  (You can also find a précis of the book's argument in Issue 43 (2011) of Change Magazine entitled "The State of Undergraduate Learning.")  In addition to the figure that Brooks cited above, the two sociologists found that, on average, only 45% of American undergraduates experience a significant improvement in critical thinking, analytical reasoning, and writing skills over their first two years in college.

Why?  Because students spend very little time on schoolwork.  In this study, students were found only to spend about 12 hours a week studying, in addition to the roughly 15 hours a week they spent going to lectures, discussions, and laboratories.  This is a sharp decline since the 1960s.  Not only that, but students now were found to spend over 43 hours per week socializing with friends, watching television, and engaging in other entertainment pursuits.

The upshot, then, seems to be as follows: American undergraduates spend too much of their time living out the Animal House fantasy, and not enough time hitting the books.  At least, that's the view that Arum and Roksa seem to endorse.  And judging from the media attention their book has received, many Americans agree.

But what has really happened to American higher education since the 1960s? Is this really a story about how our college campuses have been overrun by alcohol-guzzling John Belushi types, pictured above?  Or is something deeper and more interesting going on here?

To return to David Brooks' NY Times column, he opens with an interesting refrain that resembles what I have been hearing in many public discussions about higher education of late:

"There’s an atmosphere of grand fragility hanging over America’s colleges. The grandeur comes from the surging application rates, the international renown, the fancy new dining and athletic facilities. The fragility comes from the fact that colleges are charging more money, but it’s not clear how much actual benefit they are providing."

The thinking seems to be that while a college degree has become essential for entry into almost any field, actually attending school is getting more and more expensive.  This might be okay if students were getting something out of their degree, but it is hard to justify spending tens of thousands of dollars on tuition and living expenses when colleges don't actually seem to teach very much.

But it is also manifestly true that American colleges and universities do tend to offer a phenomenally rich educational experience to those who seek to benefit from it.  (It is not for nothing that international students flock to the United States.)  So if students spent more of their time studying and less of it partying, they might actually get something out of that very expensive degree!  So why can't we induce students to take advantage of all the opportunities that American colleges have to offer?

This is where I want to link up to Hank's post yesterday about the commercialization of personal genomics, represented by Silicon Valley startups like 23andMe.

Is anyone really surprised that treating higher education as a business, and students as customers, has led to: increased college enrollments, soaring tuition prices, and an educational experience that is tailored to meet the desires of 18-22 year old undergraduates?  Why would colleges demand that students work hard and forgo socializing to spend time in the library?  Doing so would only drive students away!  That would mean eroding one's customer base, not to mention making it harder to charge more for tuition.

Thanks Lukas. I wonder what you think of Menand's most recent book, The Marketplace of Ideas. It's come under a lot of criticism, not least from outgoing AHA president Tony Grafton, who lamented Menand's surrender to professionalism at the expense of "the Faustian magic of high scholarship."

One way of asking Grafton's question is to query the boundary between professionalism and disciplinary identity. This is something Winfried Fluck has done quite provocatively, arguing that the hermeneutics of humanism renders the disciplines within it particularly susceptible to the fates Menand describes and to some extent naturalizes. Thoughts?

I didn't exactly have Menand's book in mind when I titled this post, so I hadn't been thinking about this connection in particular. I was more concerned with the debates about undergraduate education rather than professional academic development, although of course the latter takes place in an economic context too.

I suppose I share Grafton's concern that Menand is too quick to take the language, if not the logic, of the market place on board. That said, I'm not sure about the "Faustian magic of high scholarship."